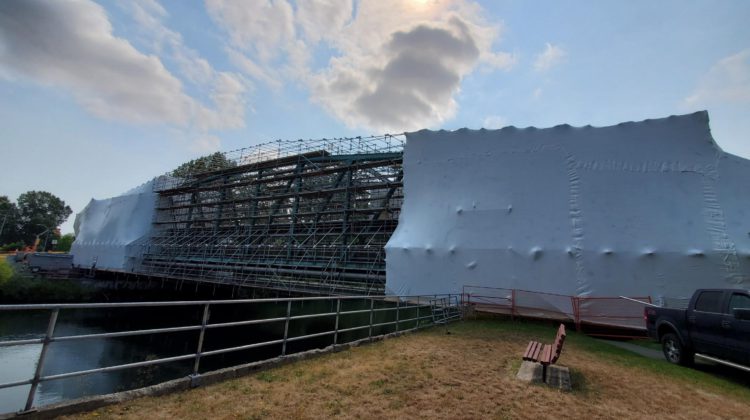 The 5th Street Bridge. (Supplied by the City of Courtenay)

While the 5th Street Bridge project is shifting gears, it’ll be a while before it’s completely finished.

The next, and final, step is deck repairs.

In order for that to happen, the white plastic containment system on the bridge will be coming down.

That completes the coating phase of the project in the classic green lead free paint.

However, because of labour shortages, the completion date has been extended into the first week of January.

The city says “this is an issue across many sectors, a shortage of specialized workers has affected the project’s progress, and prevented additional measures to potentially make up the time, such as working double shifts, or working 24 hours per day.”

According to the city, the contractor has so far only been able to maintain enough crews to work seven days a week, 12 hours per day.

The city says it continues “to explore options with the contractor to expedite the work.”

It added that equipment malfunctions, scaffolding install, and labour shortages have all been contributing factors to the delays throughout the project.

“The factors could not have been foreseen during the planning phase of the project.  All schedule delays are being actively managed with the contractor,” a city release says.

“Although the timeline has been extended, the project remains within the approved budget. Included in the contract for this work was a provision for compensation owed to the City if the project runs over-schedule due to the actions of the contractor.”

The current single lane alternating traffic pattern will continue until the project is finished, and will then return to normal pre-project condition.

With the shift to deck repairs on the bridge, the temporary walkway will be removed and sidewalk access will reopen for pedestrians.  Pedestrian access will be maintained at all times across the bridge.