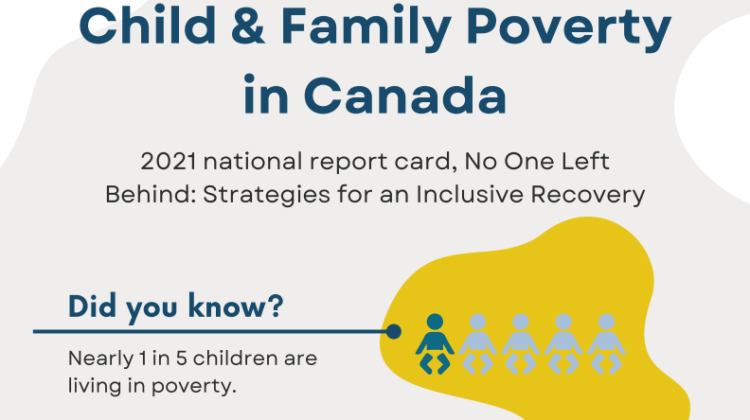 A national report card on child poverty released by Campaign 2000 states more than 1.3 million children are living in poverty in Canada.

That’s based on statistics from 2019.

The report paints a stark picture of inequalities and deepening levels of child and family poverty.

Leila Sarangi, National Director of Campaign 2000, says many children are deeper in poverty, and programs like the Canada Child Benefit aren’t reaching them.

Sarangi says they found that only 24-thousand kids were lifted out of poverty in 2019.

At the current rate, another 54 years would be needed to end child poverty.

It says not much has changed for poor children and their families.

At 18-percent, BC has a slightly higher child poverty rate than Canada’s rate of 17.7-percent.

Using data from 2019, the organization found more than 156,000 children and youth live in poor households with many in deep poverty.

It says the rate was down slightly from 2018’s 18.5-percent following the trend of gradual improvement since 2010.

First Call Child and Youth Advocacy says the progress is not fast enough for children whose health and development are at risk because they are poor.

Adrienne Montani, First Call’s Executive Director, says “once again, our report finds one in five children in BC were living in poverty.”

According to Montani, “a big surprise this year was the disparity between the average total incomes of the richest and poorest 10 percent of BC families with children.”

The report makes 22 recommendations aimed at reducing child poverty, including indexing the BC Child Opportunity Benefit to inflation to ensure the value of the benefit does not erode over time and continuing to prioritize new child care investments.