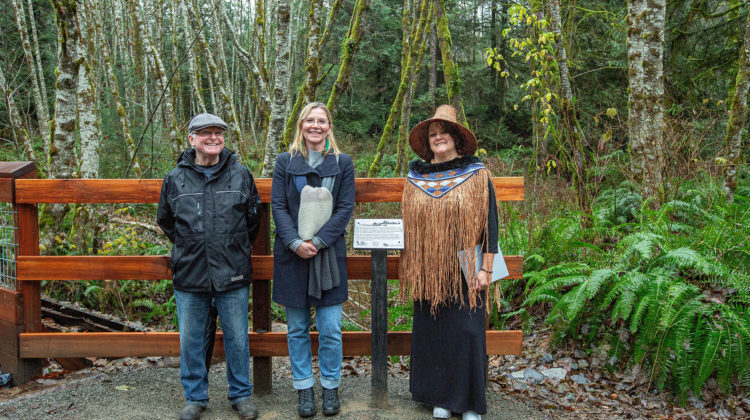 Aquatic and riparian habitats will be protected in land that has medicinal value to the K’ómoks First Nation.

The CVRD says they reached out to the K’ómoks First Nation after purchasing the land and consulted Elders and knowledge keepers to give it a name.

They say the name qax mot was suggested by Chief Nicole Rempel of the K’ómoks First Nation because the area is rich in medicines. Qax mote translates to ‘lots of medicine’ in the traditional ay̓aǰuθəm (ayajuthem) language.

The district says the purchase shows how they can work together as partners.

“We are so proud to stand together on this land called qax mot with the K’ómoks First Nation – our partners, friends and the traditional keepers of this unceded territory,” said Comox Valley Regional District chair Jesse Ketler.

“This park was purchased with the Comox Valley Land Trust for conservation purposes and is an example of how we can work together to support and protect the land and the waters that sustain our community for generations to come.”

The stream in the surrounding area is home to many different species of fish and a unique species of lamprey.

The lamprey is considered an endangered species by the Committee on the Status of Endangered Wildlife in Canada. The stream also has types of salmon, including Chum living in the area.

The naming of the land is also a step in the direction of reconciliation, according to Chief Rempel.

“The qax mot Conservation Area name represents a small step in the right direction towards reconciliation,” said Chief Rempel. “This ayajuthem name recognizes the long history of our people’s traditional use of the land, as well as the culturally important practice of medicinal plant gathering.”

CVRD manager of parks Mark Harrison says the use of the language shows the historical presence of the K’ómoks First Nation and recognition of the CVRD being on unceded territory.