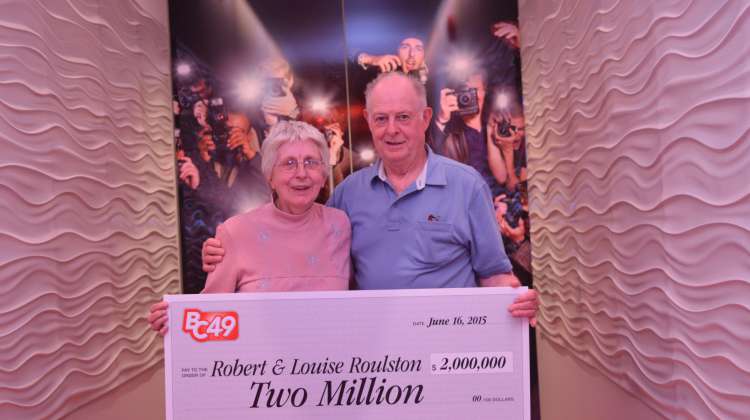 When Bob and Louise Roulston realized their BC/49 ticket was the $2 million winner, Bob had to pinch himself — he thought he was dreaming!

The Roulston’s have been playing the same numbers for years, with Bob and Louise each choosing four numbers.

“We have been playing every draw for years,” said Bob. “Right from when it was 50 cents a ticket. We started with an eight number combo, then dropped a number and started playing the seven number combo.”

“I guess we dropped the right number!” exclaims Louise.

When Bob checked their ticket online, he turned to his wife and said “we just won a bundle!”

The Roulston’s haven’t told anyone yet except their son and granddaughter. Their second son will be getting the big news on Father’s Day!

The Roulston’s, who are both retired, are planning on investing their winnings and helping their children. The $2 million winning ticket was purchased at Thorpe’s Ticket Wicket in Port Hardy.

BC/49 is a B.C.-only lottery game drawn on Wednesdays and Saturdays that gives players a chance to win up to $2 million for $1. Tickets can be purchased at a BCLC lottery retailer or PlayNow.com.