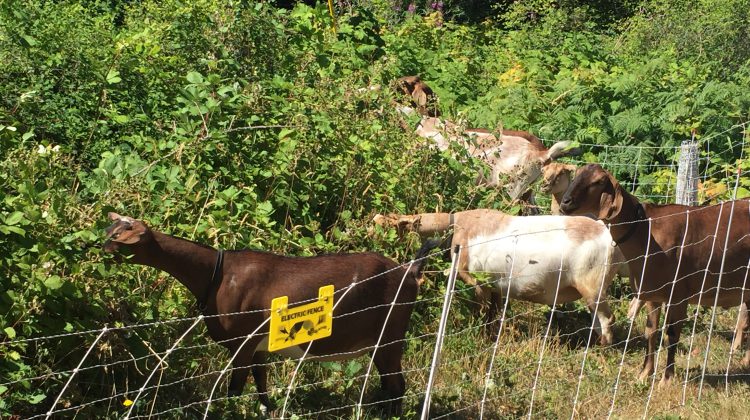 Goats have been deployed at one of the training areas at 19 Wing to help with vegetation management.

The seven goats from Goats on the Hoof are in a fenced-off area at the training area near Seal Bay.

Corey Dupuis with 19 Wing Comox says it’s the first time the base has used goats for vegetation clearing.

“We’re looking for earth-friendly ways to operate,” says Dupuis. “We maintain a lot of fence line around here. We have a lot of property – a lot of grass, bush and other plants growing that we try to keep up with and it’s quite a steady job.”

Dupuis says having the goats here is a pilot project that could be used in the future in other areas around the base.

Beverly Ness with Goats on the Hoof says goats are becoming increasingly popular for vegetation management, noting they can eat about 25 per cent of their body weight per day.

“They’re very efficient,” says Ness. “They will eat the seeds, the leaves, the berries and with the seeds, through their digestive system they render them inert – so they don’t spread the seeds around like traditional machinery would do.”

Ness says they do ask people to not lean over the fence to pet the goats and keep dogs on leash when around the site to avoid spooking the goats.

It’s estimated the goats will have the site cleared in a few days.