AAP on Civic Centre wraps up this week 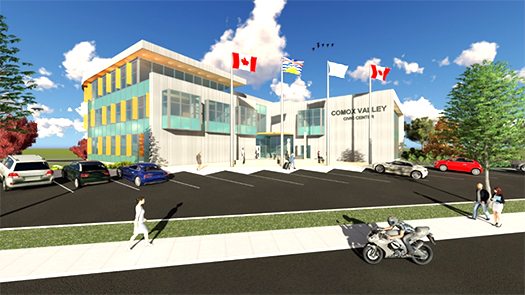 The schematic design of the proposed Civic Centre

The Alternative Approval Process for the new Civic Centre wraps up this week.

The CVRD is looking to build a new office space that will better suit the needs of the organization.

Its current location has a number of challenges including being too small for its operations. It’s also located in a flood plain and is expensive to lease.

CAO Russell Dyson says the alternative approval process was chosen by the board to seek elector approval to borrow for the new building.

Dyson notes that the plan for the new Civic Centre is considered tax neutral, “Right now the regional district is a renter – we’re paying rent on our building,” says Dyson. “The cost of building and owning a building will be no more than the rent they are currently paying.”

Electors have until 4:30 on Friday, August 18 to submit a petition.

“If the regional district receives an amount of approximately 5,000 of those forms, which is 10 per cent of the electorate, then they can’t proceed with the borrowing unless they then go to referendum,” says Dyson.

The results of the AAP will be reported out to the board, which will then decide on next steps.