The Saga of Leaf Compassion Continues 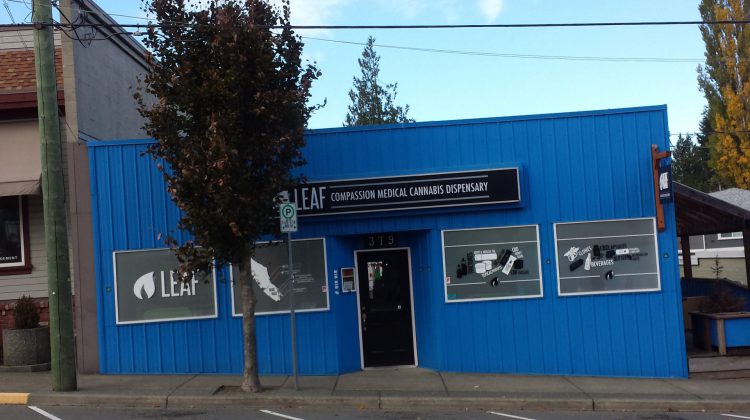 The Leaf Compassion dispensary is looking to acquire a business license after being raided twice by RCMP since opening.

The conflict between the Leaf Compassion marijuana dispensary, City of Courtenay and Comox Valley RCMP is ongoing.

The Courtenay-based store-front has been raided twice by police since opening on 4th Street a few weeks ago.

Leaf Compassion founder Kyle Cheyne says they’re looking to offer safe and tested medications for people in need, products that he says are safer than many prescription drugs.

“Every person that’s getting prescribed all these drugs, they’re going to something else or they’re getting more of that and it’s damaging them more,” he says.

“If it was the organic way, which it should have been but unfortunately it’s all about money for the government, would have saved everybody. We wouldn’t even have, you know, Oxycontin, or Percocet or any of these things.”

Courtenay Mayor Larry Jangula has been firm on his stance that the establishment doesn’t have a business license to operate, and that it is an illegal operation.

“We can’t issue someone a license for something that’s an illegal operation. The issue is confusing because so many communities are either issuing a license or the police are not dealing with the issue.” Jangula says that he does sympathize and support people who need medicinal marijuana.

Cheyne says Leaf Compassion isn’t looking to harm anyone. He says their main goal is to help people.

“Your option is to call a licensed producer, go on their website, and hopefully get it [medicinal cannabis] within 7 days.” Cheyne says within the first 2 days of opening their doors, 3 people that suffer with seizures visited the dispensary. One individual suffered a minor episode right in front of him.

“That person left with the CBD patch and high CBD strain that they’re gonna be smoking and the truth is, it works. They came back the next day and they said ‘my nerves were relaxed, I had a great sleep, can I get some more?'”

Residential feedback has been mixed in the city, with many residents opposed to Leaf Compassion being in the Valley, and some showing strong support for Cheyne and co.

One citizen brought up travel as an issue for people who need medical marijuana.

“I think that for people that use it [medical cannabis] and have to drive to Nanaimo or wherever else to get weed or need it can get it here, so why not?”

Cheyne says that “local dispensaries for especially medical purposes should have been here a long time ago. It’s an organic plant, it can’t kill you, there’s no real excuse for why it got banned. It should have gotten lifted a long time ago because of that, but it hasn’t because of how corrupt the government is.”

Cheyne will appear at the November 6th Courtenay Council meeting in the hopes of acquiring a temporary business license to move their Courtenay operation forward.