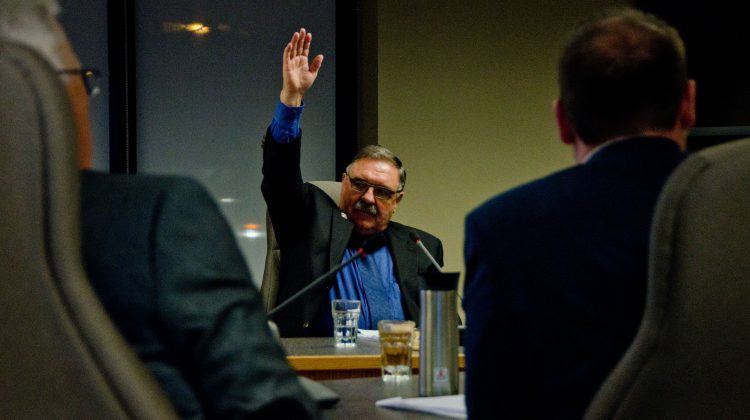 Courtenay mayor Larry Jangula votes in favour of his housing motion, which was defeated by council 4-2 on December 4, 2017. Photo by James Wood/98.9 The Goat/Vista Radio

COURTENAY, B.C- A motion pushed by Courtenay mayor Larry Jangula has been sent to municipal staff to review, after a contentious meeting of the city’s elected officials.

The motion, placed on the Dec. 4 agenda of City Council, was aimed at addressing the housing issue within the community. According to the wording of the item, 51 per cent of the residents within Courtenay are paying 30 per cent of income towards rental costs, with pressure mounting on the local rental market as residents turn away from buying homes.

The motion indicated that new rules from the federal government on mortgages would increase that pressure, and as written in the council agenda, would have had council direct city staff to take a series of steps to create more housing in Courtenay.

These steps included an evaluation of all housing development applications in City Hall, and identifying projects that were 90 days from submission, as well as the establishment of a committee of three elected officials, including Jangula, to review submissions which had been in the system for over 90 days.

A second, joint committee, made up of Jangula and one other elected official as well as city staff and the Comox Valley Development and Construction Association would have also been formed, aimed at discussing and resolving matters “concerning project approvals” while reducing project costs.

A report for council would also have been created, which would outline “all the bureaucratic processes and ‘add on costs’ for home builders that add to the final costs of new housing”, according to the wording of the motion.

Not mentioned in the written motion was a proposal by the mayor to turn a portion of Courtenay into a “tax-frozen” zone, which would fix property tax rates for owners who built higher-density homes or rental properties.

The rough area for the zone, as stated by Jangula, would extend from the Courtenay River over to McPhee Avenue, between 4th Street and 17th Street.

However, this did not happen.

After the motion was introduced by councillor Manno Theos, none of the gathered councillors moved to second the proposal. The mayor then switched places with Theos, in order to discuss the motion. As discussion progressed, disagreement from the gathered officials was evident, with councillor Doug Hillian stating he was concerned about the “politicization” of the development approval process.

The argument over the motion ended with four councillors against approval, with only Jangula and Theos voting in favour. After the meeting concluded, the mayor was vocal in his disappointment over the outcome.

“There could be as many as 6,000 people looking for rental accommodation in the Comox Valley,” said Jangula.

“Basically, what I’m trying to do is move this forward, and get out of the area we’ve been in the last three to four years, which is where neighbourhoods, a neighbour tries to get a secondary suite and almost all the neighbours object, and come out in large numbers to speak against it. We divide neighbourhoods, and even if we accommodate all of those, it’s still only a handful of units, compared to what we need.”

After citing Campbell River and Comox as examples of the “tax-frozen” zone working, Jangula described the opposition of council as “political grandstanding”.

“Basically, when they (council members) spoke about it, they’re all speaking about that they actually agree, that we need this help, it’s that they just don’t agree that I perhaps should be leading that charge,” said Jangula.

He also disagreed with the idea that the committees would be politicized, and didn’t think the proposed motion was an overreach.

“We’ve talked about this for the last three years, with this council, and we’ve done nothing about it,” said Jangula.

“It’s time we took action, and showed some leadership.”

Despite his disappointment, Jangula expected the motion to be back before council in the new year, after it’s referral to city staff.

“I think that they’re (council) reassessing what they’ve done, and perhaps having second thoughts about it,” said Jangula.

“Just a guess, maybe realizing it wasn’t such a bad idea after all, but they want it their way, in other words they don’t want to have it look like the mayor actually led the charge here.”

When asked, he also had a message for would-be renters in Courtenay.

“We hear you, we’re listening, and I especially am concerned about people that are the working poor, people that are looking for a place that need to work in the service industry that we all rely on, I hear you, and this motion was designed to help you,” said Jangula.