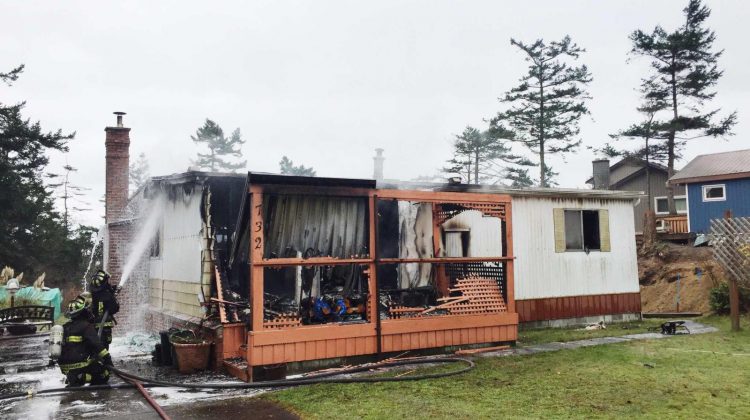 Comox firefighters spray down a residence after it caught fire Tuesday afternoon along Alvord Crescent. Photo by James Wood/98.9 The Goat/Vista Radio

COMOX, B.C- A home has been destroyed in Comox earlier today.

Emergency crews responded to a trailer fire on Alvord Crescent.

Comox Fire Chief Gord Schreiner said a resident was located outside the building in the neighborhood. “She wasn’t in the house at the time [of the fire],” he stated.

Three fire trucks responded, and Schreiner said the home appears to be a total loss.

“There are a couple pets missing. We’re not sure if they’ve escaped or are in the structure.”

He suggests the fire may have started in the kitchen, but could not confirm as the situation and investigation are still in the early stages.

“It looks like an internal fire, maybe something in the kitchen, but it’s too early to tell yet,” he said.