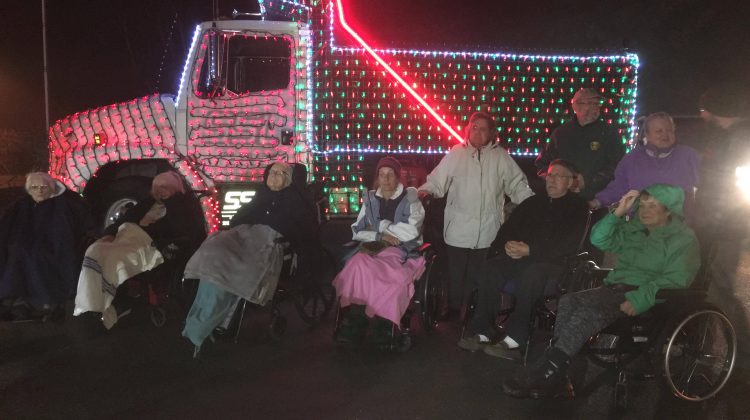 COURTENAY, B.C- A Comox Valley Christmas tradition has been shut down by the RCMP.

Over the last few years, a number of businesses in the local area have been decking out their heavy trucks with Christmas lights during the holiday season. After being decorated, the vehicles visit different Comox Valley communities. A local Facebook page with nearly 800 members is dedicated to the yearly event.

However, those wishing to see the lit-up trucks this year may be disappointed, after officers from the Comox Valley RCMP shut down the practice.

According to the co-owner of one of the member companies, Erin Kaetler, one of the trucks was pulled over on Friday evening. Kaetler owns Strate Scapes Landscaping, with her husband Kevin.

Speaking with 98.9 The Goat on Friday, she said the driver was told their lights were distracting, and given a warning. Prior to the pull-over, Kaetler indicated she had written a letter to the local detachment about the trucks. It was the first time she had reached out to the police on the matter.

She said she didn’t hear anything back, until Friday’s pull-over.

“Right after that, I got a phone call, from the police officer at the detachment,” said Kaetler.

“He told me he had just pulled over one of the trucks, and said that he had to shut his lights off. They said that it’s illegal, it’s distracting.”

On Monday, Constable Rob Gardner with the Comox Valley RCMP confirmed a driver had been stopped, and warned about the lights on his truck.

According to Gardner, the lights were a violation of the Motor Vehicle Act, and could be distracting for other drivers. He also indicated there was concern the lights could interfere with the direction signals for the truck.

Kaetler said she knows the police “don’t want to be the Grinch”.

“At the same time, they have to shut it down, just like they would with anybody else,” said Kaetler.

Reached on Monday, both the Kaetler’s and Bill Brimacombe, a crane truck driver for Pilon Tool Rentals, had not heard anything from the Comox Valley RCMP.

“We’re trying to figure it out,” said Kaetler.

“We’re hoping to talk to someone, eventually, but for now, we’re just going to switch it up. We’re still going to meet up with the care homes we’ve pre-arranged, we’ll still visit neighbourhoods. For now, I guess we’ll be parked. We’ll still arrange parking in the mall, or various places where we can collect donations for the food bank.”

Both the Kaetlers and Brimacombe expressed surprise and happiness at the wave of support the trucks had received from the Comox Valley, in the wake of the shutdown. Brimacombe hoped that the practice could continue.

“You see some people, they get emotional when you talk to them about it, or when they see you, everyone runs to the windows and waves,” said Brimacombe.

“It’s a neat thing to do, and it would just be cool to keep going, and carry on and finish it on a good note, not parked in the mall parking lot.”

They’re hoping to be out on Wednesday night, using their lights while parked.

A location for the Wednesday night outing has not yet been set.