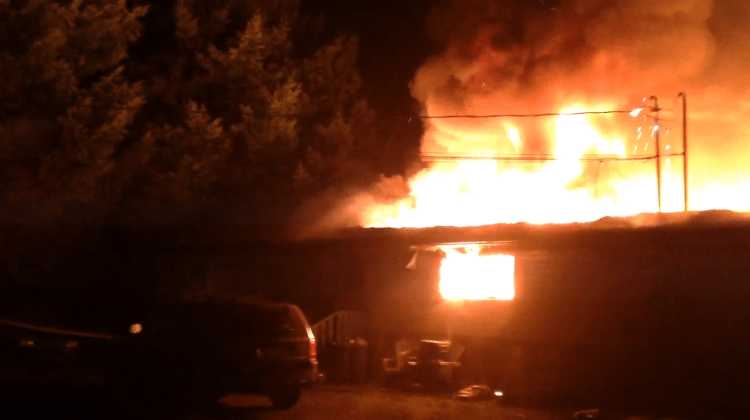 Firefighters were called out to the scene along Uplands Drive around 10:30 p.m. on Monday night, after a duplex along the road caught fire.

According to Oyster River Fire deputy chief Bruce Green, the cause of the first blaze is believed to be candles that were left unattended.

25 firefighters responded to the first call, along with two fire engines. While the fire was knocked down and contained to one suite, the structure caught aflame overnight. Fire crews were called back around 3:00 a.m., but the duplex has been left a total loss.

This is video from Oyster River last night, courtesy of @OysterRiverFire. Duplex destroyed in pair of overnight blazes. #comoxvalley #bc pic.twitter.com/tqh38j4eeI

Green said it was hard, because there had been a walkaround of the duplex around 2:00 a.m. before the second fire broke out.

“Obviously, there was an ember hidden somewhere we couldn’t see, and it started the house on fire again.”

The two families that lived in the duplex have now lost their homes.

“It’s not common, but it does happen,” said Green.

“No matter how hard we try, and how through we are, embers can be hidden everywhere, so just make sure that if it happens to you that you’re very conscious and vigilant, and stand by your house to make sure it doesn’t catch on fire.”

The family from the first fire had to be taken to hospital for precautionary reasons, due to smoke inhalation. Green stated there were no other injuries or losses.

He advised for anyone using candles in their home to not leave them unattended, and for residents to regularly check their smoke detectors.

“Always make sure you have working smoke detectors,” said Green.

“If need be, change your batteries to make sure.”