Everyone Deserves a Smile campaign packs up donations 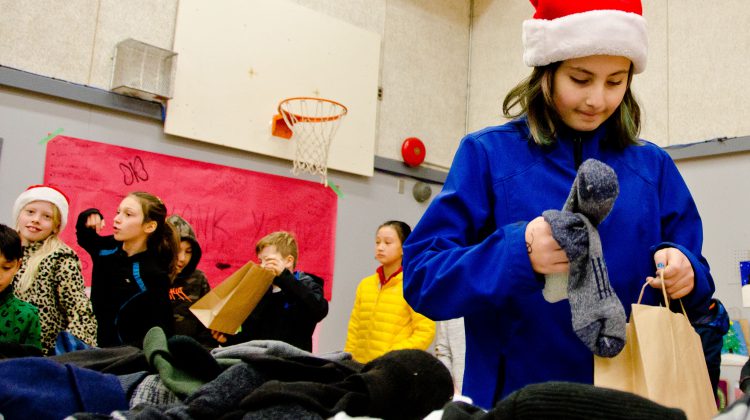 COURTENAY, B.C- Everybody Deserves a Smile is ready to deliver their 2017 packages.

Over the past two days, elementary school students across the Comox Valley have been packing up care packages for those in need in the region, as well as across Vancouver Island and the Lower Mainland.

The students have been assembling donations of warm clothing, toothbrushes, and soap into bags, ready to be delivered to support groups, soup kitchens, and homeless shelters. On Thursday and Friday, those donations were put into hand-decorated bags, and organized by where they were headed.

The main package assembly area was the gym of École Puntledge Park Elementary School, where teacher Chantal Stefan, who founded the donation drive, was overseeing the packing process. According to Stefan, just over 1,000 students will have participated in Everybody Deserves a Smile (EDAS) in 2017.

“We’re really ferocious and fierce about it being intentional,” said Stefan.

“Every bag has been hand-painted, every card is home made and signed by a student’s first name.  They’ve had lessons on homelessness, poverty, addition, and active citizenship, they learn about their local situation here and those in need.”

Stefan said that care packages will be headed to 24 different groups, with 600 of the packages going to nine agencies in the Comox Valley. Donations will also be going to Nanaimo and Victoria next week.

She also said it was “beautiful” to see the students choosing the items to donate in their care packages.

“What we always talk about with the kids is it’s about intentional giving,” said Stefan.

“We tell them this is going to someone. Not a label, a someone. A mom or a dad, a brother or a sister, a cousin, a neighbour, a little boy or little girl.”

Stefan will be headed to East Hastings in Vancouver on Dec. 23, alongside Principal Stéphane LeBlanc and other teachers from Ecole Puntledge, to deliver care packages in the area.