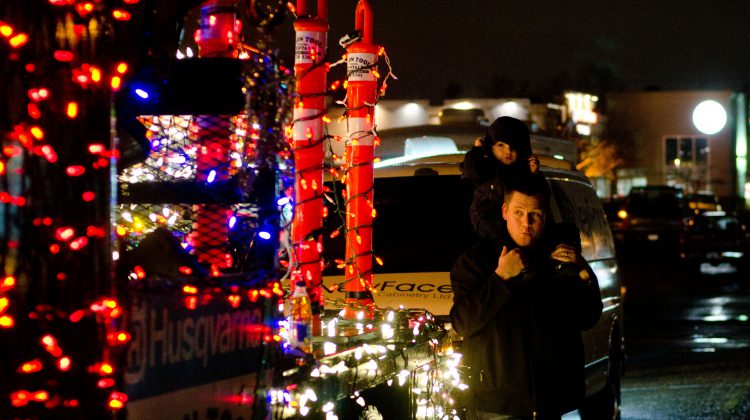 Ahdi Peters carries his son Sebastien on his shoulders while they look at the "Christmas Trucks" in the Driftwood Mall parking lot on Sunday, Dec.17, 2017. Photo by James Wood/98.9 The Goat/Vista Radio

COURTENAY, B.C- The Christmas truck owners in the Comox Valley have found a way around their shut down.

Earlier this month, the annual tradition of lit-up heavy trucks driving around Valley communities was stopped by the local RCMP, who deemed the bright trucks a distraction on the road.

While the drivers have been looking for dialogue with the police, they’ve decided to start staging in area parking lots, showing up in Comox and Courtenay over the weekend.

On Sunday evening, they stopped by the Driftwood Mall parking lot for a brief appearance, drawing a small group of people to the far end of the lot to take a look at the decorated vehicles.

According to Bill Brimacombe, the driver of the Pilon Tools Rental heavy truck, the weekend events went well. A pickup truck had itys flatbed filled with food donations, and as of Sunday evening, a total of $171 had been collected in monetary donations.

Brimacombe said the community support for the trucks was appreciated, and was excited by the recent statements from Courtenay mayor Larry Jangula, who had voiced displeasure at how the truck shutdown was carried out by the RCMP.

As for the possibility of a parade permit being issued to the trucks before the end of the Christmas season, Brimacombe was optimistic.

“We’re getting towards the end of it, we’re only nine days away now,” said Brimacombe.

“Right now, it’s getting a little tougher, but I’ll take anything. I’ll take an extra day. If I can cruise around in residential neighborhoods for one more day, I will definitely do it.”

He also said it was tough to see residents “bashing” the RCMP online.

“I know they’re just doing their job, and what they’re told,” said Brimacombe.

His plan for next year would look at getting parade permits, as well as multi-night defined parade routes, a bigger truck, and more lights.

“I guess we’ll start earlier, and check around, see what we can do, if we can get any kind of permits,” said Kaetler.

She didn’t think a permit would be issued before the end of the current season, but was pleased to have the support of the municipal authorities.

“It’s great to have their (the mayors) support,” said Kaetler.

“Just reading that we have their support and they want to work with us, by the sounds of it, is really great.”

Announcements for their parking-lot locations will be posted on their Facebook page.