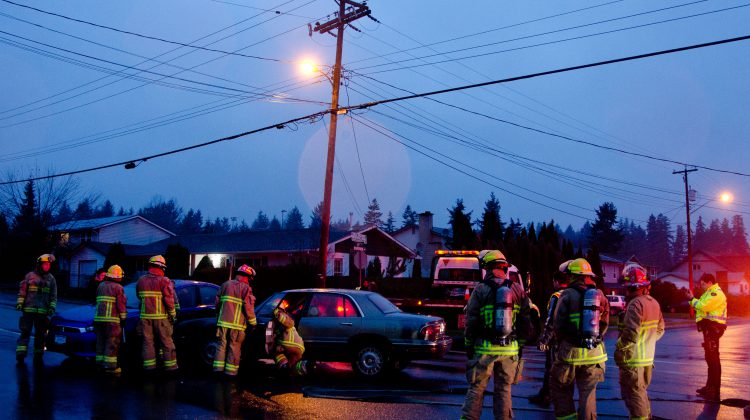 Members of the Courtenay Fire Department respond to an accident close to the Driftwood Mall on Dec.17, 2017. Photo by James Wood/98.9 The Goat/Vista Radio

COURTENAY, B.C- The Courtenay Fire Department has had a record year.

According to Courtenay Fire Chief Don Bardonnex, the department has had a total of 876 calls for service in 2017, with around 562 of those calls being for emergencies. The situations ranged from fire investigations and motor vehicle collisions to assists to ambulance workers and open burning calls.

Speaking on Thursday, Bardonnex said the major areas of increase for emergencies were in the assists to ambulances, as well as dumpster fires, fire investigations, and open burning. Mutual aid calls also increased, which Bardonnex said was a “great asset” for both the Courtenay department and other fire services in the Comox Valley.

As for population growth playing a role in the record rise, Bardonnex believed it was “normal growth”.

“The city is getting larger, the population is getting there,” said Bardonnex.

“A lot of it is the open burning, and the summer season we had with the wildfires.”

As for the likelihood of a similar amount of calls in 2018, Bardonnex couldn’t say for sure.

“I couldn’t tell you, I’m not a meteorologist,” he said.

As for any current advice he had for residents, he recommended they keep their Christmas trees watered, and for any trees showing signs of drying out to be taken outside. He also advised for people to keep safe on the roads.

“With the winter conditions that are coming on, slow down, drive safe,” said Bardonnex.

“You don’t want us visiting you on the side of the road.”