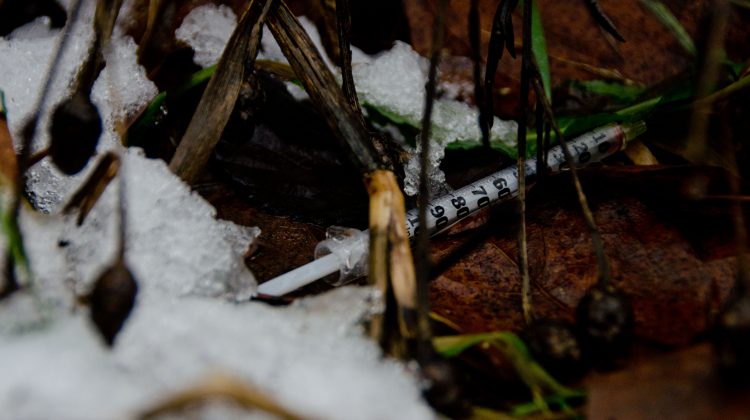 COURTENAY, B.C- Bartosz Bos is sounding the alarm after a close encounter with needles in Courtenay.

Bos and his girlfriend were walking along the Rotary Trail on Christmas Day in the city, and had decided to cut across from the path to Piercy Avenue, along the side of the municipal works yard. The path they followed is a dirt trail, on the other side of the train tracks.

Right next to the path is an undeveloped plot of land with a small creek running through it, and a small array of side trails that lead into the brush. However, Bos and his partner soon found it would be better to stay on the main path, after seeing used needles and other trash littering the site. A photo of the area where the litter was found. Image courtesy of Bartosz Bos.

According to Bos, who spoke with 98.9 The Goat on Thursday morning, the area is often used for illicit activities.

“It was all throughout the bushes,” said Bos.

In the wake of the discovery, Bos believes the littered material is indicative of a problem in Courtenay.

He later posted photos of what had been found to a local social media group, which garnered a range of responses. After those discussions, Bos said more education could be provided about drug use and addiction.

“Addition isn’t only something that happens to other people,” said Bos.

“There are many different kinds of addiction. There is drug addition, gambling addiction, alcoholism, these are all different kinds, and we’ve found ways to deal with them. However, for some reason, injectable drugs have some sort of stigma attached to them.”

He believes the whole community should be aware of the issue.

“This isn’t something that happens to bad people, or only bad people do,” said Bos.

“This is something that the community has to deal with, and talk about. It’s going to be difficult, not pleasant, but over the long term everybody can come to an understanding and eventually, not have to walk down a trail and find a bunch of discarded, biohazardous material.”

Courtenay has a Community Drug Strategy, facilitated by the municipal government. A supervised injection room also operates in the city.

A statement supplied by the City of Courtenay indicated that municipal workers clear needles when they receive a request from the public.

“As well, there are a number of hotspots adjacent to trails and parks that staff will do visual checks on when working in the area,” read the statement.

The Public Works department can be reached at 250-338-1525 or on the City of Courtenay website.