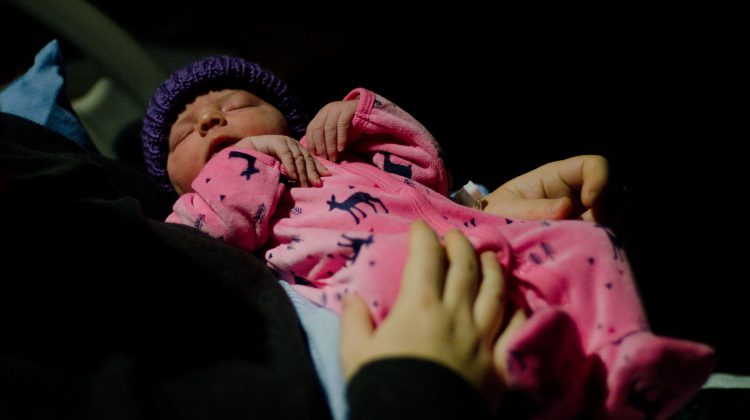 Autumn Rose Peerens, the child of Darren Peerens and Paige Dalby, sleeps in Paige's arms on January 3rd, 2018. Autumn Rose was the first baby born in 2018 at the new Comox Valley hospital. Photo by James Wood/98.9 The Goat/Vista Radio

COURTENAY, B.C- The first baby of 2018 in the Comox Valley has been born at the new North Island Hospital.

According to her parents, Autumn Rose Peerens entered the world around 8:40 a.m. on Wednesday morning. Father Darren Peerens and mother Paige Dalby made their way up from Qualicum Beach to the hospital for the birth, in “an orderly fashion”.

As for the name, it was inspired by two things.

“For the time of year, and Rose, we like the middle name as Rose,” said Darren.

“When she was born, she was actually red, like a rose.”

“It wasn’t something that we were going to expect, but it ended up happening, when we found out that she was the first one.”

“Our other daughter that is two and a half, she was born over at the old hospital,” said Darren.