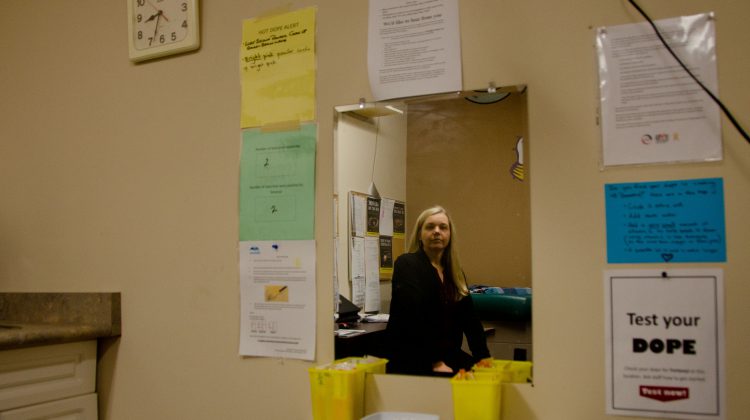 Sarah Sullivan, the manager of the Courtenay and Campbell River offices of AIDS Vancouver Island, is pictured in the Courtenay office's overdose prevention room on Jan.4, 2018. Photo by James Wood/98.9 The Goat/Vista Radio

According to Sarah Sullivan, the manager of the Courtenay and Campbell River offices of AIDS Vancouver Island, the overdose prevention site in their offices along 6th Street in downtown Courtenay has seen a steady flow of visitors since the operation began in 2017.

In addition to offering the site, AIDS Vancouver Island provides outreach, counselling, and harm reduction services for HIV and hepatitis C positive people, plus those at risk of contracting the diseases. The provincial government contracted with AIDS Vancouver Island to operate the site, which is smaller in scale than a supervised injection centre.

Using the equipment available in the Courtenay offices, drug users can test their purchases for the presence of fentanyl, and choose whether or not to consume. If they choose to go ahead, they can inject or snort the drug under the supervision of a staff member, who is trained to respond in the case of an overdose.

Site users cannot inhale drugs in the room, due to a lack of adequate ventilation posing a safety issue for staff.

Sullivan said that all staff are trained in first aid, naloxone use and oxygen provision, with 911 calls if necessary.

As for the users who come by, she indicated it was mainly people who already had accessed the organization’s services prior to the site opening.

“We have regulars who come every single day, who feel safer using with some supervision and support, and then we have some people who have heard about it who weren’t regular service users.”

Since April, the site has had 386 visits recorded, with 52 different people coming by. A total of 17 overdoses have taken place, with no deaths.

“They were all responded to immediately, and all with positive outcomes,” said Sullivan.

“All those people lived.”

Word of the site, according to Sullivan, has spread mainly by word of mouth. An information session has been held at the local library, and the municipal government was made aware of the site’s startup earlier in 2017.

Aside from questions from a few downtown businesses, there hasn’t been any pushback against the operation.

“It’s been very positive for the community that we serve, as well as family members of those communities,” said Sullivan.

“We have a lot of visits from concerned family members, of people who do use drugs, for overdose training as well as letting their family members know that this space exists.”

Sullivan hopes that the site is a benefit to the community.

When asked about the possible expansion of the service, Sullivan stated it would be “ideal” if the site was able to offer safe inhalation services, and expand their hours of operation. Currently, they operate seven days a week and on statutory holidays, with varying times for opening and closing.

She also would like to have more resources for outreach services, with the goal of preventing drug overdoses at home. In the meantime, the room along 6th Street will continue to be the safest place in the Comox Valley for drug users.

“We are operating the overdose prevention site to keep people alive,” said Sullivan.

“This is a very real crisis. We have residents of the Comox Valley who have died because of poisoned drugs, and if we can do anything to help keep people alive, we are going to do that. We are going to help make the community a better place.”