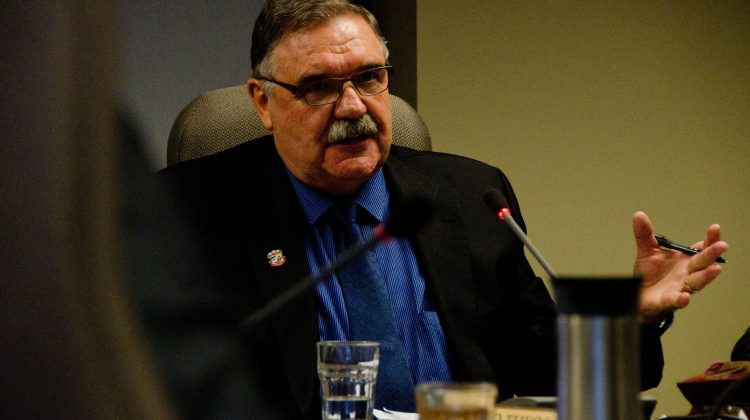 Courtenay mayor Larry Jangula is pictured during the council meeting on December 4, 2017. Photo by James Wood/98.9 The Goat/Vista Radio

COURTENAY, B.C- A move by the City of Courtenay to install needle-disposal boxes in local parks is being supported by Mayor Larry Jangula, though it remains unapproved by council.

The item came up at City Hall on December 4, when the assembled councillors were briefed during their public meeting.

Island Health would be giving six boxes to the city, free of charge, while municipal staff would handle the day to day pickups. A photo of one of the boxes, included in the Courtenay city council agenda on Dec.4, 2017.

Jangula expressed support for the idea on Wednesday.

“A proper place to dispose of needles is a much better idea than to just have people throw them on the ground,” said Jangula.

“It does cause a safety hazard, it causes a hazard for children, a medical hazard. Whether people would use these boxes or not, I don’t know. Often, people, when they’re shooting up in parks, they’re not thinking clearly.”

Sarah Sullivan, the manager of AIDS Vancouver Island in Courtenay, was also in favour of the idea.

“The more opportunity that people have to dispose of needles and drug paraphernalia, the better,” said Sullivan.

“We see many public spaces, bathrooms now have sharps containers, BC Ferries has them, the public library has them, there is an opportunity for people to safely dispose of them.”

The budget will still need to be approved by council.