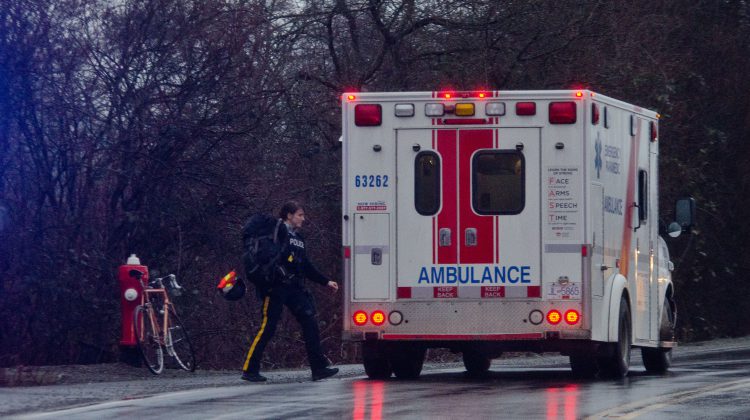 An officer of the Comox Valley RCMP picks up the belongings of a man who ended up in the ditch beside the road while biking on Jan. 7, 2018. Photo by James Wood/98.9 The Goat/Vista Radio

COURTENAY, B.C- A cyclist has been taken to hospital after tumbling down an embankment in Courtenay.

The accident took place around 3:00 p.m. along Comox Road, near the former site of the Field Sawmill. A man in his 40’s was biking along the road when he ended up going off his bike, and into the bushes along the eastbound lanes of the road.

It is not clear if the man had been struck by a vehicle. According to an officer of the Comox Valley RCMP, the man suffered a cut to his face from the bushes, and possibly had a concussion. He was taken away from the scene in an ambulance, around 3:30 p.m.

The accident delayed traffic along the route, with officers controlling alternating lanes.

No other injuries were reported at the scene.