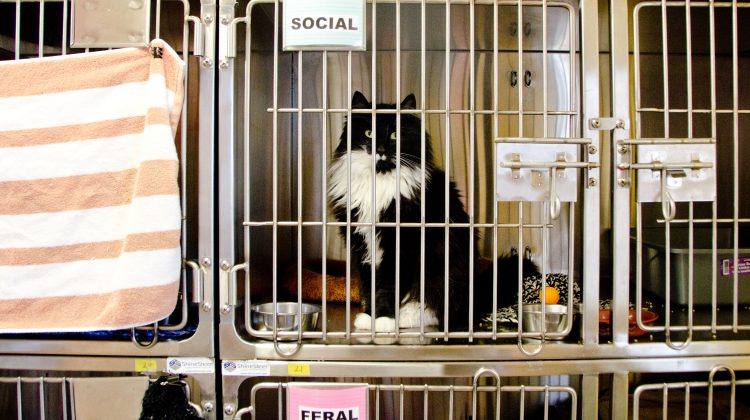 Reginald, a cat rescued from Willemar Avenue in Courtenay, sits in his shelter cage in the P.A.L.S offices along Comox Road on Jan.9, 2018. Photo by James Wood/98.9 The Goat/Vista Radio

COURTENAY, B.C- A local feral cat rescue is getting bigger in 2018.

For the past three months, Kitty Cat Prevent-A-Litter Society (P.A.L.S) has been working to expand their building, which currently sits just behind the Comox Valley Animal Hospital along Comox Road.

The operation is run out of one large room in the structure, which serves as the shelter space, storage space, and administration office, all at the same time.

For the past ten years, volunteers with the organization have been trapping feral cats within the Valley and giving them medical checkups, as well as spaying and neutering the animals who pass through their doors. While they’ll look to re-home feral cats in barns or in their old colonies, any kittens that are found will be socialized and put up for adoption.

According to P.A.L.S President Bryan Baker, the group first started in a local house with three volunteers, and has been in the current building for the last five years. They see nearly 600 cats each year.

Now, P.A.L.S is headed to a larger space, taking over a stable right behind their current location. Renovation and expansion work has been underway since October of 2017. P.A.L.S President Bryan Baker stands in front of the organization’s future home behind the Comox Valley Animal Hospital along Comox Road on Jan.9, 2018. Photo by James Wood/98.9 The Goat/Vista Radio

“The building behind has been there for many, many years,” said Baker.

“It was an old stable that was used for the Comox Valley Animal Hospital, the horses and the cows. Now, it’s going to be for cats.”

Baker said the work is likely to be finished by the spring, with the cost expected to be around $20,000.

“Being a registered charity, we unfortunately don’t have all the costs covered, but we raise funds as we go along,” said Baker.

“It’ll allow us to bring in more (cats), because several times a year our cages are full, and we can’t take in any more. With the expansion, it’ll certainly open that up, and we can separate our isolation room and exam room.”

As for what impact the expansion would have on the organization’s rescue abilities, Baker estimated an increase in yearly numbers.

“In a perfect world, we’d be able to take care of all the cats that are abandoned and feral in the Comox Valley,” said Baker.

More information can be found at the group’s website: http://www.kittycatpals.com