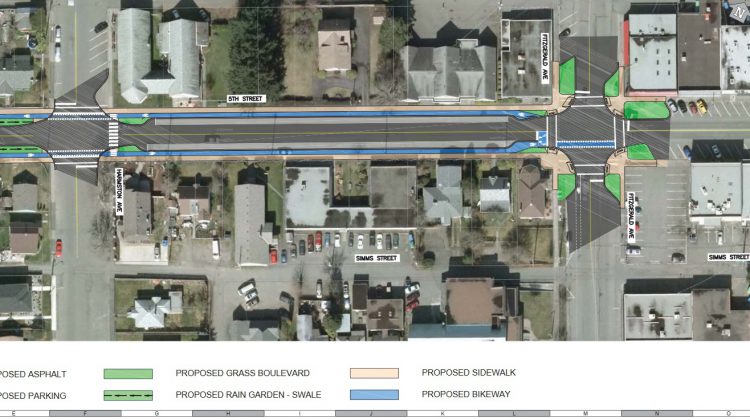 COURTENAY, B.C- A major project is slated to tear up the upper end of Courtenay’s downtown in 2018.

Under a program known as the Complete Streets Pilot Project, Courtenay’s municipal government will be making significant changes to 5th Street, starting in April.

Under the current plan laid down by the city, the stretch of the route from Menzies Avenue to Fitzgerald Avenue will be remade, with the aim of adding bike lanes, rain gardens, and changing the intersection of 5th Street and Fitzgerald Avenue over to a four-way stop, instead of an eight way stop. 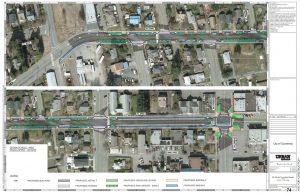 A full map of the planned project, taken from the Courtenay city council agenda on Jan.15th, 2018.

The latest appearance of the project on the council agenda was on Monday night, when city staff brought back the results of a “pop-up” study conducted earlier in the spring and mid-summer of 2017.

During the study, the planned changes under the Complete Streets project were made using temporary markings and blockages, in order to observe how traffic changed when the route was adjusted.

While the staff report mentions positive and negative feedback from residents, overall benefits to pedestrian crossing times and vehicle wait times were found during the “pop-up” phase. Vehicle performance was also noted as improved. 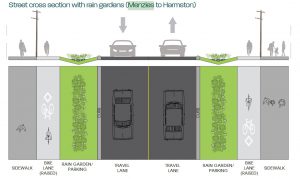 A diagram of the planned additions to 5th Street. Image taken from the Courtenay city council agenda on Jan.15, 2018.

However, the reception among the gathered council members to the report, and the project overall, was less than positive at times. As the item was discussed, the issue of the project’s impact on the downtown was raised, as well as frustration over a lack of options for overhead infrastructure being put underground during the changes.

Councillors were also doubtful about the “pop-up” changes being positively received by the public, with Councillor Doug Hillian stating he had avoided the intersection, and Councillor Manno Theos saying he had seen many negative reactions on social media.

Despite the mixed reaction to the report, and concerns about the project, council still voted to accept the document.

The planned timeline for the project will see construction begin in April this year, and carry on until December of 2018. The total cost is set at $3.253 million, all of which is being paid by a grant from federal gas taxes.

A public open house on the project is being planned for Jan. 25, according to the council agenda. A tender will also be issued for construction in the next few weeks.

The exact construction schedule has not yet been determined.