COMOX VALLEY, B.C.- A lack of a boil water notice in the Comox Valley following this weekend’s heavy rainfall raised some questions and concerns from system users.

The Comox Valley Regional District (CVRD) said there’s a simple answer as to why a notice was avoided: the ultraviolet treatment system that has been installed at the district’s chlorination station.

“The UV treatment is something that was going to be implemented in the future with our water treatment project that’s going to be completed in 2021,” said Bob Wells, the Chair of the CVRD’s Water Committee.

“Staff at the RD and Island Health were able to come to an agreement on an interim solution, since it’s still going to be a few years before the completed filtration project’s going to be done.” 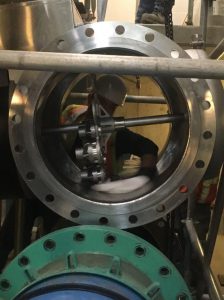 UV equipment has been installed at the existing chlorination station. Photo courtesy CVRD.

The UV system will reduce boil water advisories, which have burdened Comox Valley water users for the past few years, by 80 per cent.

Wells noted that there is a lot of excitement in the air at the Regional District.

“This was an idea that we were not allowed to implement years ago, and when it came down to the fact that we were going to be looking at years before we got the funding for our larger project, when it looked like there wasn’t a solution, we were really thankful that Island Health was able to work with Regional District staff to say ‘okay, this is an option, we can try this out to see if it works’,” he said.

“Not only are we avoiding the boil water, but we are providing the safest possible water that we can to the residents of the Comox Valley.”

The UV system was expected to be installed next month, but Wells said it was a pleasant surprise to have it set up early.

“We are going to be using the UV right up until the implementation of the new water filtration plant,” Wells said.

Wells explained that in short, the ultraviolet system serves as a “germicidal light”, which kills bacteria, viruses and other items that can harm those who drink the water.