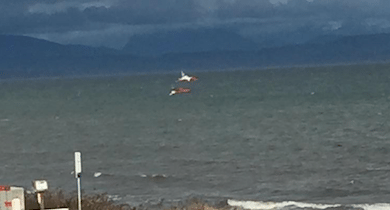 Crews flying above the water during the search for the Bradens on Jan. 21, 2018. Photo courtesy Carmen Christensen.

CAMPBELL RIVER, B.C.- The family of the two deceased in last Sunday’s ATV accident is saying thank you to the community for its support.

The victims have been identified as Bill and Megan Braden.

The father and daughter were attempting to cross Woods Creek on an ATV with another individual.

The third individual was later rescued by a passer-by. Megan was found deceased hours later, while Bill was discovered the following morning.

The family has released a statement in light of the tragic event.

“On Sunday, January 21, 2018, the Braden family lost both Bill (father) and Megan (daughter) in tragic accident. Bill and Megan were both incredible people – full of good humour, warmth and a sense of fun. The father and daughter shared kind hearts, a dry wit, a love for the outdoors and a sense of adventure,” it reads.

“It has been an incredibly difficulty time for Shana (mother, wife) and Kenzie (sister, daughter). Both women are incredibly strong and are dealing with the loss with grace, strength and courage.

The family would like to extend a sincere thank you to members of all Search and Rescue, the Campbell River R.C.M.P., Fire Departments, the Coast Guard, Victim’s Services and the countless people who stopped on that day to see if they could help with the search. The family also would like to extend a heartfelt thank you to Jerry for his heroic measures that day. A girl is alive due to his efforts.”

“As friends of the family, we have been receiving inquiries from people – some of whom have never met the Braden’s – wanting to know how they can help. We spoke with the family and they are overwhelmed by the support and encouragement they are receiving from the community. They would like to thank everyone for their thoughts and wishes, and for the respect the community has shown in allowing them to grieve in private.

The family has asked that if people do want to donate, that in lieu of flowers, they donate to Kenzie’s continuing education fund. Kenzie is currently in grade 12 and has always been an honour role student. She has received both the Citizenship award and the Triple A (arts, academic and athletics) award from Timberline Secondary School. She plans to pursue a career in nursing and has applied to several universities.”

“To donate, please visit any Coastal Community Credit Union and deposit to:
– Account 100023473174
– Transit # 15210
– Institution #809
You can send an e-transfer to the family email address at 2Bradenfamily@gmail.com, and use password/security question “family”.

There will be a public celebration of life for both Megan and Bill on Saturday, February 10, 2018 from 1:00 p.m. to 3:00 p.m. at the Campbell River Sportsplex (800 South Alder St, Campbell River, BC). We will be sharing photos and stories of Megan and Bill, the family invites everyone who knew them to come and help celebrate their life.

As friends of the family, we also want to thank the community for the generosity of heart and spirit that you have shown towards the family. Thank you.”