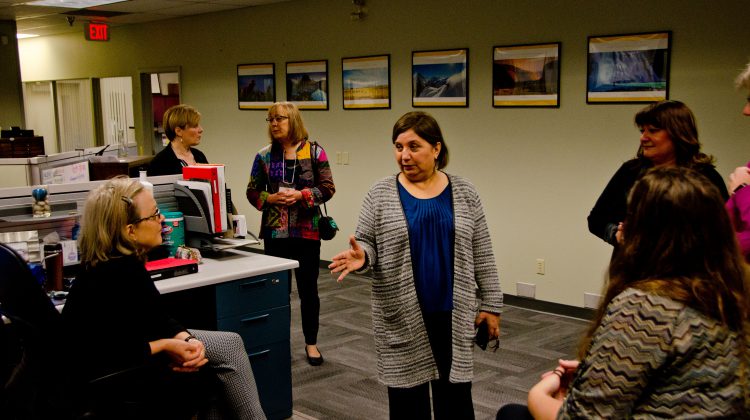 B.C's Citizens’ Services minister Jinny Sims speaks with staff at the Service BC branch in Courtenay on Jan.30, 2018. Photo by James Wood/98.9 The Goat/Vista Radio

COURTENAY, B.C- The province’s minister for Citizens’ Services paid a visit to the Comox Valley on Tuesday.

Jinny Sims, who also serves as the MLA for Surrey-Panorama, had been heading up Vancouver Island from Nanaimo this week, after an announcement geared towards increasing organ-donation registries in British Columbia.

According to the information included in that announcement, 60,000 residents of the province have registered as organ donors since 2015.

Collaboration between the province and BC Transplant has also resulted in over 18,000 people registering at Service BC offices between April and December 2017, an increase of four per cent since the previous year.

Sims stopped by the Courtenay office of Service BC on Tuesday morning, and spent some time speaking with employees of the provincial office. Speaking with 98.9 The Goat, she indicated she had a positive impression of the local branch.

“We’re also the face of government, through Service BC,” said Sims.

“For the average person out there, their first interaction with government, local government, is through these offices.”

She also stated that organ donation can create “a lot of emotions”, compared to blood donation.

“We don’t have as many people signing up,” said Sims.

“A lot of the time they don’t have the information, we haven’t done the education, and they don’t get to interact with somebody to find out any concerns and questions they have.”

Sims was happy with how the local office of Service BC has been handling organ donation sign-ups, and stated that the question was always raised to residents coming by.

“In our centres, when people come to renew their driver’s licenses, they’re here for their fishing license, they’re here to pay their taxes,” said Sims.

“Whatever it is they come here to do, there is a conversation to be had around organ donation, and this office has done an amazing job.”

Sims had also headed to the wrong office at first, stopping at the Service Canada in Courtenay before heading over to the Service BC branch. According to the minister, the reception at the provincial office was a bit warmer than that of the federal government.

“I think people here are truly fortunate to have such an amazing staff in this office, who are also very engaged in their community through a lot of volunteer work as well,” said Sims.

Sims continued on to Campbell River later on in the day, with her tour headed to Kelowna after leaving Vancouver Island.