New hospital helipads expected to be operational by May 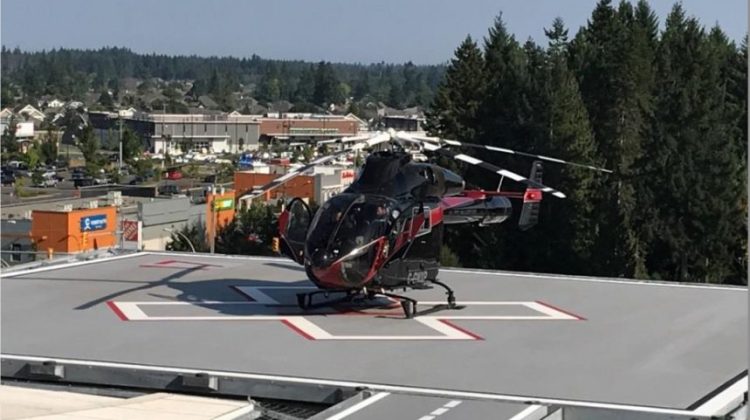 COURTENAY, B.C- The pair of helipads at the North Island’s new hospitals are expected to be up and running by May.

The helipads haven’t been in operation since the two new hospitals opened in 2017, after failing to be certified by Transport Canada.

According to Tom Sparrow, the Chief Project Officer at the North Island Hospitals Project, the federal transport authority gave instructions to fix the pads in the summer, after testing the Comox Valley hospital’s pad in late August, and Campbell River’s pad in late September.

After those tests, the health authority was given a number of instructions to get the infrastructure certified, such as tree removal along the projected helicopter flightpaths and improved lighting to help guide in pilots.

On Thursday, Sparrow indicated the last steps that need to be taken are the topping of remaining trees in the flightpaths, as well as the lighting upgrades, which are on order.

Trees were previously removed at both sites, and Sparrow stated there were no plans to take down any more.

“We are not looking at removing any more trees from either site,” said Sparrow.

“Those situations were resolved about two months ago.”

He anticipated that 15 to 20 trees would need to be topped near the Comox Valley hospital, along with trees in three different locations in Campbell River.

According to Sparrow, most of the tree topping will be conducted in February, while the final delivery date for the new lighting systems is still being determined. He thinks the pads could be “fully operational” by May 1, 2018.

“If we can get Transport Canada out here earlier, if control systems can arrive earlier, that will trigger moving things forward,” said Sparrow.

“We want to be safe in the dates we provide, so I would say end of April, early May.”

When asked about the reasons behind the pads being failed by Transport Canada after construction, Sparrow said it was unfortunate that the federal agency only provided feedback once the infrastructure was built.

He hopes for more communication between Transport Canada in the building phase, when it comes to future projects.

“We need to work a lot more closely with Transport Canada,” said Sparrow.

“These issues, that we’re obviously and unfortunately addressing now, should be addressed well in advance of construction.”

As for any costs associated with the work to meet Transport Canada’s requirements after construction, Sparrow said those would be borne by the project’s private partner, Canem.