Bomb disposal training kicks off with a bang at 19 Wing 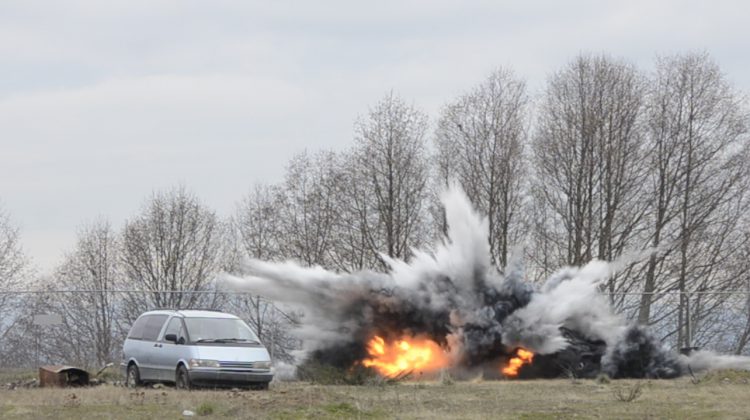 COMOX, B.C- Residents of the Comox Valley may hear some explosions in coming days.

Tuesday morning marked the start of Exercise Taz Runner 2018 at 19 Wing Comox. The exercise is part of regular training for bomb-disposal technicians with the Canadian Armed Forces, with 24 soldiers from across Canada heading to the base for the next two weeks.

After briefings conducted on Monday, disposal exercises started off on Tuesday on a range next to the base’s airfield. Shaped charges of varying sizes were attached to a demonstration vehicle, which was gradually destroyed by successive explosions.

According to Warrant Officer Dan Marlow, who was overseeing the range during the demonstration, the exercise is meant to help soldiers get more familiar with their tools, maintain their skills, and make sure their equipment is functional. 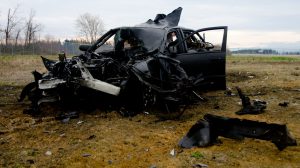 The remains of the destroyed car. Photo by James Wood/98.9 The Goat/Vista Radio

“The benefit is that it helps build muscle memory, and confidence in the tools that they’re using,” said Marlow.

“It also helps them learn potentially new skills from people who do this work.”

Technicians from the military bases in Gagetown in New Brunswick, Ottawa, Bagotville in Quebec, Cold Lake and Edmonton in Alberta, and Comox itself are undergoing the training. Some of the soldiers taking part are newly-graduated from courses in bomb disposal.

“This, for them, is to build that muscle memory,” said Marlow.

“They’ve done their course, they know it, they passed it, they know the skills and drills, now it’s just to build that confidence and muscle memory.”

Marlow also said that those taking part all volunteered for the training.

“You cannot be forced to do this specialty,” said Marlow.

“It’s a specialty within trades that are already part of the Canadian Armed Forces.”

Technicians have to re-certify every three years.

Marlow indicated that the training is drawn from historical examples, such as incidents in Afghanistan and America, with technological change a constant factor.

“It’s a lot like trying to figure out a puzzle, and how to beat the bomber,” said Marlow.

The exercise will be running for the next two weeks.