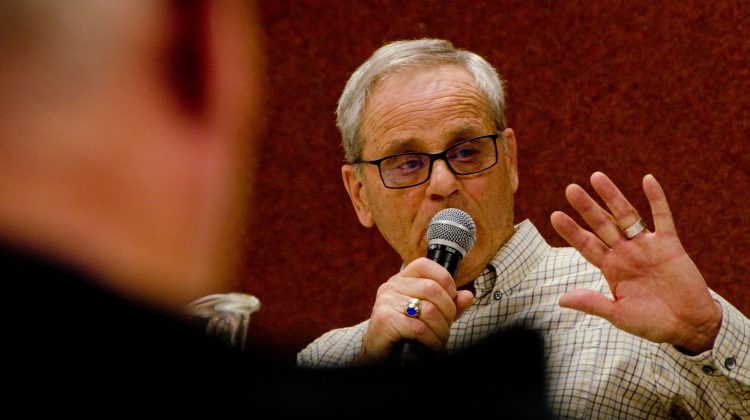 UBID Board Chair Peter Jacques speaks during the trustee board meeting on Feb.15, 2018. Photo by James Wood/98.9 The Goat/Vista Radio

UNION BAY, B.C-Union Bay residents may be able to stand down when it comes to threats to their drinking water.

Located south of Courtenay, the area has a water system drawing from Langley Lake, which serves as the primary source of water to Union Bay homes.

Logging company Island Timberlands owns the land around the lake, and had been planning on cutting close to the water this year.

However, the plan caused outcry from residents and the Union Bay Improvement District (UBID), which now appears to have stopped the cutting.

Trustees and residents have been publicly voicing opposition to the plan, with a letter-writing campaign to MLA Scott Fraser.

During the districts monthly meeting last night, UBID Board Chair Peter Jacques stated that Island Timberlands had verbally agreed to log in 2019, and study issues resulting from cutting near Langley Lake in 2018.

However, the agreement wasn’t in writing, and Jacques said he was waiting to hear back from the company on the matter.

The lack of a written agreement didn’t sit well with trustee Jim Elliot.

“When we’re talking about the value of the timber that’s there, the danger that logging in the watershed would present to the water supply of Union Bay, the potential danger, I think it’s important that we have some firm agreements in place so that everyone has a chance to study the situation and make some rational decisions,” said Elliot, after the meeting.

He wants to see an agreement in writing with the company.

“That’s really up to the administrator, I guess, and the board, and the board chair to follow up on that, as they’re the ones that seem to have spearheaded this so far,” said Elliot.

“In the past, Island Timberlands have been really good players with the district, and I hope that continues, but I would be much more comfortable seeing something in writing saying that they wouldn’t be logging in that area in 2018.”

98.9 The Goat has reached out to Island Timberlands for comment on the logging delay.