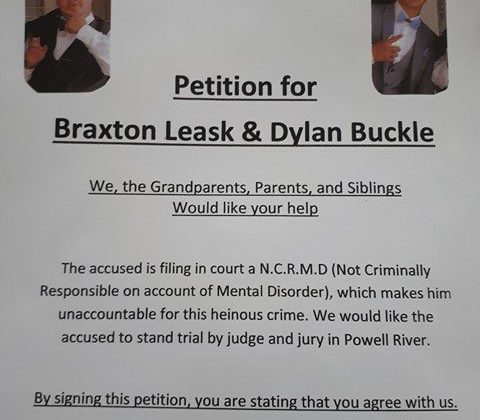 POWELL RIVER, B.C- A Powell River mother is outraged that her son’s accused killer might not be getting a trial.

Nishelle Aline Guignard is the mother of Braxton Leask, who was one of two young men killed in Lund, B.C last summer. The accused in the case, 19 year old Jason Foulds of Powell River, was formally charged with two counts of murder and one count of attempted murder with a firearm after his arrest.

The case has been steadily making its way through the courts since the charges were laid, with the latest appearances in Campbell River to determine trial dates.

However, Guignard says she received a call two weeks ago from Victim Services, indicating that the next court appearance could take the case in a new direction.

According to Guignard, Victim Services informed her that both Fould’s lawyer and the Crown had agreed that Foulds was not criminally responsible for his actions due to his mental health, following a physiatric assessment.

She wasn’t happy with the news, and said she reached out to confirm what she had been told with the Crown. Guignard told 98.9 The Goat that Crown Prosecutor David Fitzsimmons echoed the assessment, and agreed with the finding.

She’s now worried that the case will never go to trial.

“I know how grey it is, I know how it works, there is no black and white, we want a second opinion,” said Guignard.

“We want it to come to trial. If it doesn’t go to court, none of the evidence is going to come out, stating his state of mind at that time.”

She’s since launched a petition in Powell River, looking to gather signatures in order to see the case go to trial. Along with an online petition, she said she had been distributing flyers in town, and there was “huge support” in the community.

“The community came together so huge for us. They knew my son, and the boys that were affected, and respected them, and the support has just been unbelievable.”

Both Fould’s lawyer Paul McMurray and Crown counsel David Fitzsimmons declined to comment about the matter, though McMurray did state the next appearance for Foulds would be a routine matter.

A call has been placed to Victim Services in Powell River for comment.

The case will be back before the court in Powell River on Feb.27, 2018, with online court information stating the appearance is for preliminary inquiry.