No injuries after Cummings Road fire 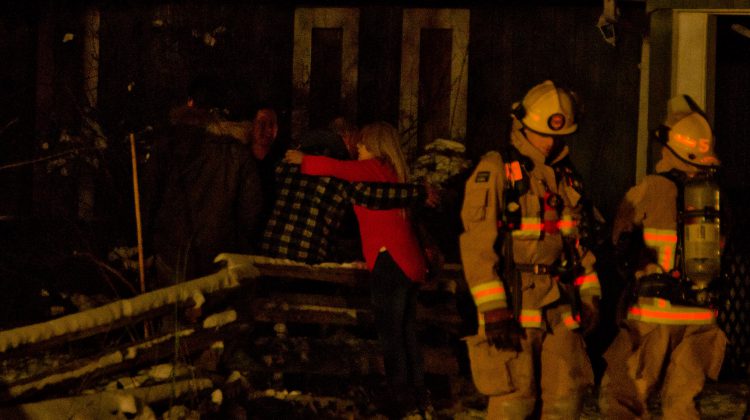 A woman who was forced to leave a home along Cummings Drive in Courtenay following a house fire hugs a friend on the night of Feb.20, 2018. Photo by James Wood/98.9 The Goat/Vista Radio

COURTENAY, B.C- Two people had to leave a home in Courtenay on Tuesday night after a fire along Cummings Road.

According to Courtenay fire chief Don Bardonnex, the fire had started on the front of a home along the north side of the road, by the building’s front door and underneath a covered deck. While the flames spread up the outside of the house and into the roof, there was “very little” fire damage into the building.

Crews had responded to the scene around 11:20 p.m, with the fire first reduced by neighbours close to the property. The two women at the home at the time of the fire were woken up by those neighbours, prior to fire crews arriving at the scene.

“They saw the fire first, got them out of the building, and attempted to put it out at that time with an extinguisher,” said Bardonnex.

“Anytime you knock down a fire, it takes time to build back up, and that gives us time to get here. We did exactly the same thing with command vehicles, when we arrived on scene. We hit it with an extinguisher to knock it down, and wait for the engine to get here.”

A total of 20 firefighters and three fire engines responded to the scene, with Bardonnex describing the call as “textbook”.

The two women, who Bardonnex described as “guests”, had to leave the home due to the damages to the front door. Both were visibly upset, but no injuries were reported from the scene.

There is no official word on the cause of the fire.

UPDATE: Highway 19A in Black Creek reopens after ‘vehicle incident’