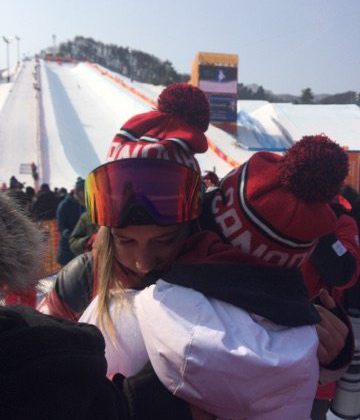 In the wake of Sharpe’s gold medal win, Comox mayor Paul Ives said that discussions are underway with the Vancouver Island Mountain Sports Society (VIMSS) about celebrations back home. The society had provided scholarship funding to the athletes in the past.

“We’re looking forward to seeing what can be done, as some of our athletes return home to this area,” said Ives.

“We’ll have to factor in scheduling and other things, but it’ll probably be something that follows the Olympics and Paralympics.”

Ives indicated that the Comox town council will be discussing celebration planning at their next meeting, and raised the idea of Sharpe being a parade marshal for the annual Nautical Days parade in the community.

“We of course recognize that we’re part of the Comox Valley as a whole, so the City of Courtenay has its parade, as does Cumberland,” said Ives.

“So I imagine they would be doing similar honours.”

He anticipates they’ll be hearing back from VIMSS in the spring, and is looking forward to Comox celebrating their hometown athlete’s win.

“Anything we can do to help promote the great accomplishments that she has, but also use her experiences in a positive way to show what can be done with the many hours of training and dedication she’s (Cassie) put into it,” said Ives.

“Along with the other athletes, that of course have really grown up at Mount Washington with the support of the community, their family, their sponsors, and reached the pinnacle of their achievements to this point.”