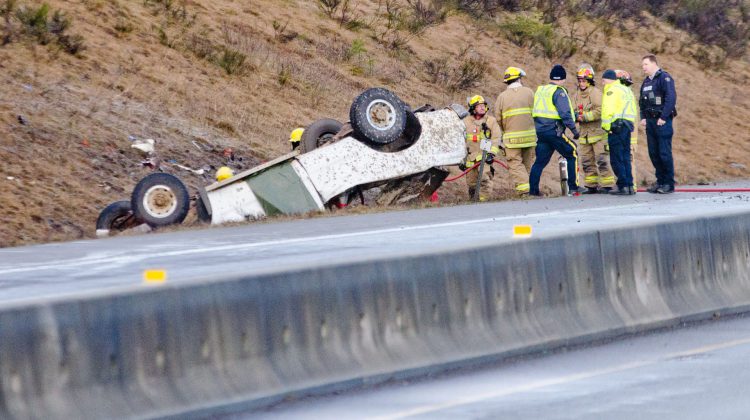 Firefighters and a police officer stand near a flipped over truck on Highway 19 on March 1,2018, after the driver of the vehicle was killed in a rollover. Photo by James Wood/98.9 The Goat/Vista Radio

BLACK CREEK, B.C- A motorist is dead after a fatal rollover south of Black Creek.

The incident took place early Thursday morning, in the southbound lanes of Highway 19. While a clear cause for the accident remains unknown, a white truck ended up rolling while driving south of the Black Creek tributary bridge, ending up on it’s roof.

The driver of the vehicle was killed in the crash. No other vehicles were involved, and the driver was the only occupant of the truck.

Crews from the Oyster River fire department were called out to the scene around 4:15 a.m., and the southbound lanes of the highway were shut down from Hamm Road to the Jubilee Parkway.

Police are now investigating what took place, and no additional information about the driver has been released at this time.

According to Oyster River Fire Chief Bruce Green, the highway should be open by 9:45 a.m.

Green also asked for drivers to avoid passing fire crews who are actively responding to calls, after several drivers passed fire engines on their way to the call in the morning.