Three sent to hospital after crash on Highway 19A 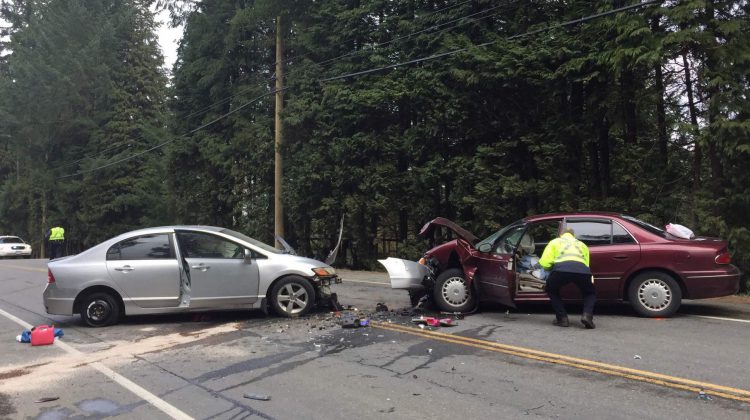 Police have shut down a portion of Highway 19A at Hamm Road after a motor vehicle accident. Photo by James Wood/98.9 the Goat/Vista Radio

UPDATE: RCMP have informed 98.9 the Goat that Highway 19A has been reopened.

BLACK CREEK, B.C.- A portion of Highway 19A has been closed after a motor vehicle accident that sent three people to hospital in Campbell River.

Constable Dave Dormuth with North Island Traffic Services said he and his partner were alerted of a driver that was “all over the road” near Hamm Road at around 1:00 p.m.

“We came down onto Highway 19A, and proceeded southbound and at that time, we saw an immediate big puff of smoke in the air and came across this two-car head-on collision,” he said.

“Upon arriving at the scene, we were able to determine that a grey car had crossed the centre, double-solid line, and side-swiped a purple PT Cruiser just prior to (driving) head-on into the red Chrysler that’s in the middle of the road as well,” he told 98.9 the Goat at the scene.

When asked if the driver of the grey vehicle was impaired, Dormuth said he could not “say for sure, but that’s something we are looking at, possible impairment.”

“We had another witness come up and say she was following the vehicle, and on the other side of the Oyster River bridge, that the vehicle actually stopped in the middle of the road and then continued on and was crossing the lines (on the road) several times.”

He said they will be looking in to see if the driver was impaired, or if they were suffering from a possible medical condition.

Dormuth said three people were involved, and complained of injuries.

The ages of those involved were not revealed at the scene. Air ambulance service was called off, and the three were taken to the Campbell River hospital via ground ambulance.

Dormuth said the road will probably be closed for “at least three hours”. Highway 19A is closed in both directions at Hamm Road.

“For Courtenay, if you’re coming northbound, just go straight up to the Inland Island Highway and avoid this area until at least 5 o’clock.”