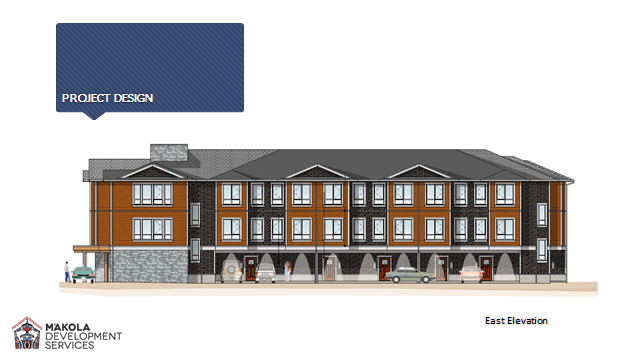 An image of the building's concept art.

COURTENAY, B.C- An affordable housing complex in Courtenay is expected to be finished up this year.

The complex in question is known as the Braidwood project, which is looking to assemble around 34 units of affordable housing in Courtenay’s east side.

The work on the concept has been ongoing since the City of Courtenay purchased the property at 810 Braidwood Road several years ago, following a sale of lots along Cliffe Avenue.

Funds from the Comox Valley Regional District, the Vancouver Island Health Authority, and the provincial government have also been put towards the project, with $3 million from the province in 2016.

In documents submitted to Courtenay city council on Monday, the project’s handover date is listed as Dec. 24, 2018, and a formal ground-breaking ceremony is expected sometime this month. Council was happy to hear the news.

“The project will carry on, and hopefully by Christmas it’ll be suitable for thirty-some odd people to live there, as an affordable (place),” said Councillor Doug Hillian, who was acting mayor on Monday.

“Hopefully, there will still be some funding from the province to make some of the units supportive housing. As you know, we have a huge housing issue in the community for vulnerable people, and this is something we’ve been waiting for and anticipating for a long time.”

Hillian said it was a positive move.