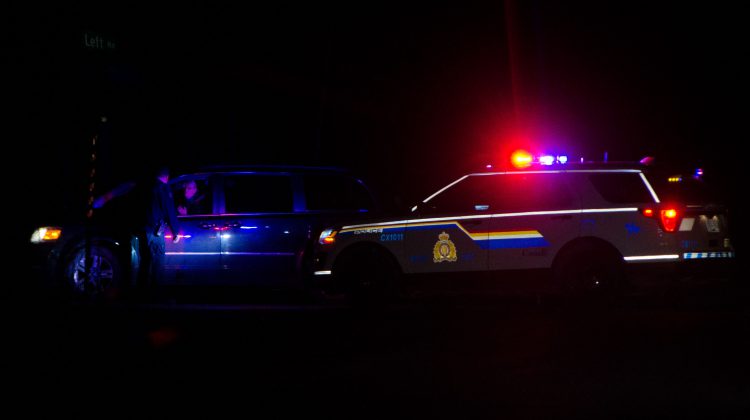 A member of the Comox Valley RCMP speaks to a motorist along Left Road while officers search for a shooting suspect north of Courtenay on March 14th, 2018. Photo by James Wood/98.9 The Goat/Vista Radio

COURTENAY, B.C- Police appear to be getting close to catching the suspect in a local shooting.

Around 7 p.m. on Wednesday evening, several police vehicles raced out of Courtenay to Coleman Road, north of the community.

Officers then proceeded to block off several parts of the road, with multiple drivers getting stopped and searched at the intersection of Coleman and Left Road.

The roadblock was cleared around 7:40 p.m, with area residents allowed to carry on to their homes. However, officers encouraged them to lock their doors, and stay vigilant.

Dog tracking units are believed to be in the woods around the rural properties around Coleman, while an RCMP helicopter is present over the area aiding in the search.

According to Dan Cunningham, a resident of the area, the shooting suspect was spotted near his residence along Coleman Road earlier in the evening by his young son.

“My son was looking out the window and saw a guy in camo walking across our property,” said Cunningham.

“He thought I was home, I wasn’t home. My father in law went outside to intervene with him. I guess he started walking back up the road, into the bush.”

Cunningham said his mother in law called the police, who were already present in the area.

“It sounded like every cop in Courtenay is here,” he said.

Cunningham also said that the man was wearing a balaclava.

The shooting that caused the search took place around 1:25 a.m. at a residence in the 5700 block of Highway 19a North.

The man shot was 30 years old. In the early morning, he had encountered another man on his property. After a brief interaction, he was shot.

He was taken to hospital by BC Ambulance, and treated for non-life threatening injuries. The suspect, described as a young man between 20 and 25 years of age, has not yet been found.

Since notifying the public about the shooting, police have received several tips, which involve the sighting of a white man in the suspect’s age range. In one of the sightings, a homeowner in the area reported finding an unknown man in his unlocked detached garage, who left after being confronted.

The unknown man left on foot, without incident.

“Investigators have not yet confirmed if these incidents are related however they are encouraging residents in the area on Highway 19 A and Coleman Road, to report any suspicious activity they see to the Comox Valley RCMP at 250-338- 1321,” read a release from the detachment.

“If a suspicious person is encountered, do not approach or engage with them. Get the best description you can, a direction of travel and call 911 immediately. The police are also reminding residents, as a rule for their general safety, to keep doors locked.”

No additional information on the suspect’s description has been released by police, and Constable Rob Gardner of the Comox Valley RCMP stated that people should “carry on with their day”, as the search unfolds.