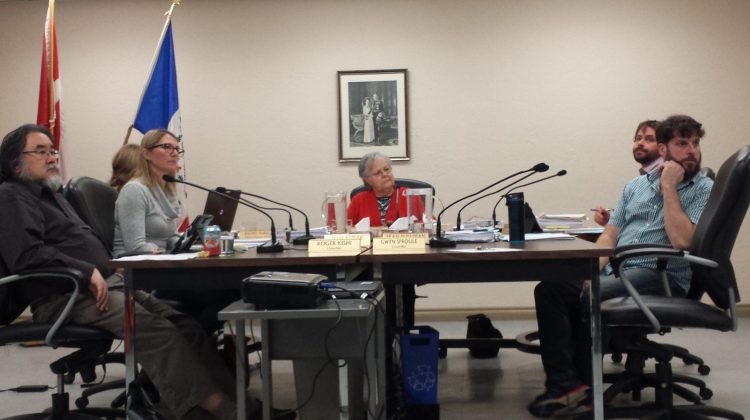 Cumberland mayor Leslie Baird (centre) said the village has been issued a non-compliance notice from the Ministry of Environment for its wastewater issues. Photo by Justin Goulet/98.9 The Goat/Vista Radio.

CUMBERLAND, B.C. – The Village of Cumberland is feeling the pressure from the provincial government.

The village has been issued a non-compliance notice from the B.C. Ministry of Environment for its sewage treatment issues.

“The village has been out of compliance for many years with the regulations concerning our wastewater, and although we have been working on various different projects over the years to fix this issue, the ministry has finally said that they don’t want to wait anymore, they want us to move forward,” said Cumberland mayor Leslie Baird.

“We have a committee (the Wastewater Advisory Committee) formed to look at our waste management plan, and they are coming forward with a report on next steps. In the meantime, staff is meeting with the ministry staff in Nanaimo on April 3rd.”

She said during that meeting next month, the village should know more about “the direction this letter (the notice) we have received is going.”

The notice included a referral for an administrative penalty. This means the village could face fines if it continues to not be in compliance with the province’s wastewater treatment regulations.

Since the 1990s, the village has worked to develop a Liquid Waste Management Plan (LWMP), which was re-started in 2016 after Cumberland pulled out of the Comox Valley Regional District’s proposed South Sewer Project.

That initiative failed in a referendum.

Baird said the village continues to look for available grants to assist in developing its LWMP. “Each time we change the direction that we’ve gone, and we’ve kept them (the ministry) informed of what we are doing and how we are doing it.”

She said the potential fine is not something they need to address right now.

“We were told that it would take a year any way, so hopefully we can come up with a solution and maybe we will get lucky and receive grant funding and be on our way,” she said.

Baird said if they were to get fined, she could not say how much those fines would be. The Wastewater Advisory Committee will bring their recommendations for treatment upgrades to Cumberland council on April 9th.