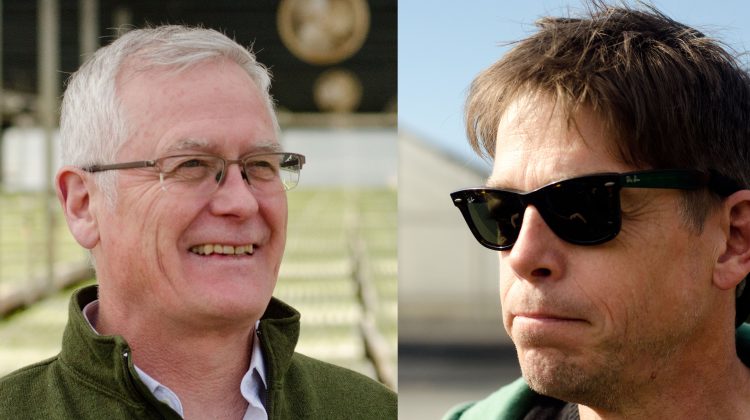 Donaldson, who serves as B.C’s Minister of Forests, Lands and Natural Resource Operations, and Rural Development, was in the Comox Valley today for a visit to Sylvan Vale Tree Nursery in Black Creek.

After his tour, which he said he enjoyed, Donaldson spoke to the press about the proposed water bottling operation in Merville, which has drawn considerable backlash from the community.

The application was made by Christopher Mackenzie and his wife, Regula Heynck. The pair are seeking to extract and bottle around 10,000 litres a day from their family well along Sackville Road.

According to Donaldson, staff in his ministry made the decision to allow a conditional license because it wouldn’t negatively impact residents of the area.

“That’s why the water licenses were issued in the first place, because they made this decision based on the availability of water, on the impacts to other users, on the environmental impacts, and on consultation with First Nations,” said Donaldson.

The minister said he’s reviewed the requirements that led up to the decision with staff, and that he was “very confident” in the actions of his ministry. He also mentioned that the consultation process is now being reviewed, after outcry from the community and from K’ómoks First Nation, who issued a statement outlining their opposition in recent weeks.

Donaldson indicated that the ministry will be laying out their information that led to the decision to all parties concerned in the near future. As for the decision of rezoning that still lies with the Comox Valley Regional District, he said that they “have the decision on that, for sure”.

“We have a water license for a certain business,” said Donaldson.

Mackenzie was in the area during the minister’s visit to the tree nursery, and spoke to the press. He said that opposition to the bottling plan was being led by a campaign to “distract and confuse people from the beginning,” and that he was there to defend the merits of the license awarded by the province.

“It was issued on such merits, of sustainability, good access to make beneficial use of this water,” said Mackenzie.

According to Mackenzie, an environmental appeal against his license has been filed by one of his neighbours, though he expected it to “play itself out” over the next few days.

He also said that he and his wife hadn’t anticipated the amount of backlash the proposal would get.

“In the beginning, we just thought that we would have a side of the road, cottage business,” said Mackenzie.

“We have a lot of cyclists, and there are a lot of boil water advisories, we thought, gee, wouldn’t it be nice to have people come up with their containers and get some of our awesome water, lucky us!”

He didn’t comment on any contingency plans in place if their land isn’t rezoned by the CVRD to fit their application.

“We’re trying to follow the established guidelines, and the CVRD has proven their bias, before we had our chance to say anything to the area directors in public,” said Mackenzie.

“We are going to continue to follow the rules. We’re going to go to round two.”

He stated he was shocked when he heard comparisons to Nestle, and swore that the couple’s business would never be sold.

“We’re never going to sell it, I have to live here too,” said Mackenize.

“You have to understand, it’s not for a huge profit. Of course, nothing comes to your door for free, but we can stand our water product beside the other businesses in town that sell water, and know that ours is from a socially and sustainably acceptable source, that’s being wasted in my neighborhood for decades by the millions of litres.”

The rezoning decision for the CVRD is still out for consultation.