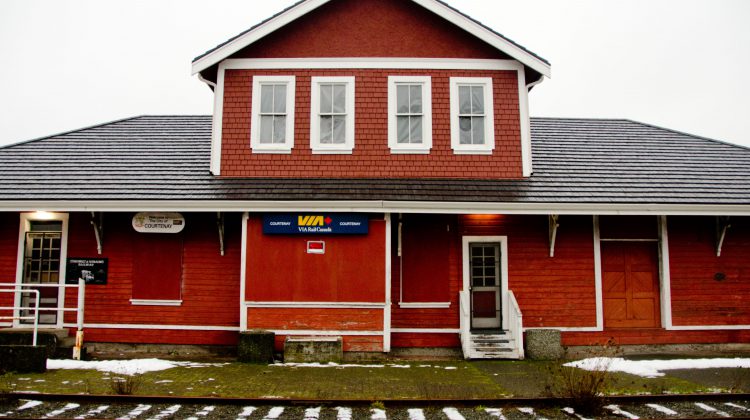 The exterior of the old train station in Courtenay is pictured in a Goat News file photo. Photo by James Wood/98.9 The Goat/Vista Radio

According to Jangula, who serves as the mayor of Courtenay, a meeting of the Island Corridor Foundation last week brought up the topic of what could happen to the station, as well as some landscaping concerns around the site.

Residents had told municipal staff about potholes around the station, and Jangula said that the foundation is now working with the City of Courtenay to fill in the holes with gravel. The possibility of the structure being rented out was also brought up, which Jangula highly supports.

“We’re so blessed that Rotary put an incredible amount of money and energy into saving that building,” said Jangula.

“They put a new roof on it, they put in new windows, they replaced the upper siding, which has done a lot to preserve that 102 year old building.”

He indicated that the foundation would be willing to talk to anyone who would be looking to rent the station, “hopefully for a long time”, though the use would have to be within reason.

“It has to stay as it is,” said Jangula.

“I’m still very determined, and feel as though a lot of the community, the majority still want to see rail returned. I’d like to see it preserved as it is. I appreciate what Rotary has done, and I want to see it up and running.”

He believed that the building could be used as a restaurant, a museum, or a pub, similar to other re-purposed stations on Vancouver Island. He also believed the neighbourhood around the station would make good use of a re-purposed building.

“When you look at where the growth is happening in the Arden Road area, it’s actually quite central for those folks,” said Jangula.

A final decision on the fate of the old Island rail line has not yet been made.