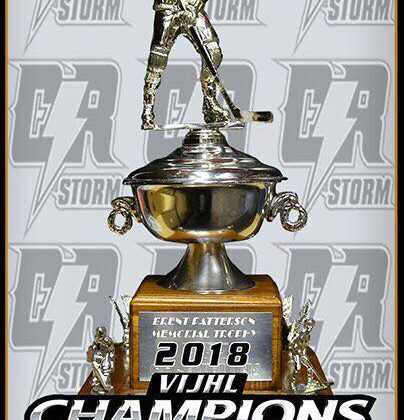 CAMPBELL RIVER, B.C. – With two wins in a row, the Campbell River Storm are VIJHL champions for the tenth time in twenty years.

The young squad bested the Saanich Braves 6-0 at the Rob Brind’Amour Arena Saturday night to claim the league crown.

Goals were scored by Darren Hards and Damon Porter in the first period.

The second frame was all Campbell River, with goals from Jalen Price, Dawson Frank and Kyle Kaufmann.

Ryan Butler scored the team’s final goal at the 5:03 mark of the third to seal the deal. The Storm will now move on to the 2018 Cyclone Taylor Cup in Richmond.

The tournament determines the British Columbia provincial champion. That action starts up on April 12th.