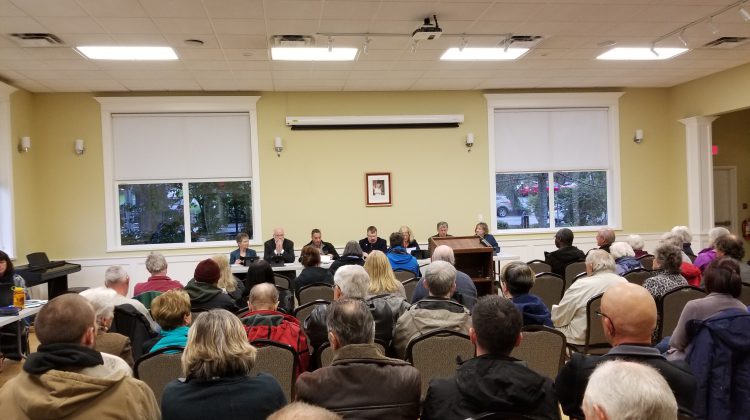 Comox council discussing the sale of cannabis at a public meeting in Comox on April 4, 2018. Photo by Justin Goulet/98.9 The Goat/Vista Radio.

COMOX, B.C. – The d’Esterre House in Comox was packed as the town’s council held an open house regarding a proposed ban on cannabis sales.

The town is considering an amendment to its zoning bylaw 1880, which could see the exclusion of retail cannabis stores as the legalization of marijuana initially comes into effect.

Residents in attendance showed mixed reactions to the bylaw.

“I feel the devil is in the details. One of the things that the federal legislation does not differentiate is between medical cannabis and recreational cannabis, so I think it’s important that if you are considering this that that needs to be a consideration in your bylaw,” said Catherine McCann. She’s a local pharmacist and the owner of the Medicine Shoppe Pharmacy in Comox.

Although McCann voiced support for the bylaw, she did bring up some of her concerns about retail cannabis.

“One of the things that is very concerning to me is that often many of these retail outlets, they are called dispensaries or pharmacies with an ‘f’, (and) it’s very misleading to the public,” she said.

“People don’t know or don’t understand that they are not going to get traditional pharmacy services in these retail outlets. I think that’s one of the other things that federal legislation does not address at all and is something that should be considered in this bylaw.”

Mayor Paul Ives responded by saying they are waiting for direction from the province as well.

Resident John McNamee was displeased with the bylaw, saying it was not fair for residents to have to wait to purchase and sell cannabis in their hometown.

“I would suggest that rather than place a ban on retail outlets, this work issues that staff be directed to complete a study on parameters within the next three months so that Comox will be ready to approve the retail sales of cannabis in time for July 1st, 2018, legalization date,” he said.

Comox town planner, Marvin Kamenz, noted that the current closest date of legalization is now August. He said the town is working to have their regulations in place in time for legalization or prior to legalization.

“Maybe this bylaw amendment can be simply tabled to allow time to have studies completed because as the mayor has said there are no serious inquiries yet regarding business licenses for retail outlets,” McNamee said.

Kamenz said the intent is to develop a framework regarding retail sales. The town will hold a public information meeting, and that information gathered will go back to council and the bylaw would be introduced in a public forum before its adoption.

McNamee brought up the confusion over the word “ban”.

“I think that’s the wrong word. My suggestion to council is to have this tabled or we have some kind of a date, a deadline, for city staff to complete whatever they need to complete,” he said.

“Council’s intent, along with planning recommendations, is to consider having an initial ban and then setting some parameters around which retail sale of cannabis, once it’s legalized, could occur,” he said.

“We have decided not to make a decision tonight. We will consider it at our next regular scheduled meeting, and then we will see where we will go from there. Staff has also indicated this evening that they will bring forward feature recommendations around where and when and how our retail operations could be considered as legalization occurs some time this summer or early fall.”

Comox council’s next meeting is scheduled for April 18, 2018.