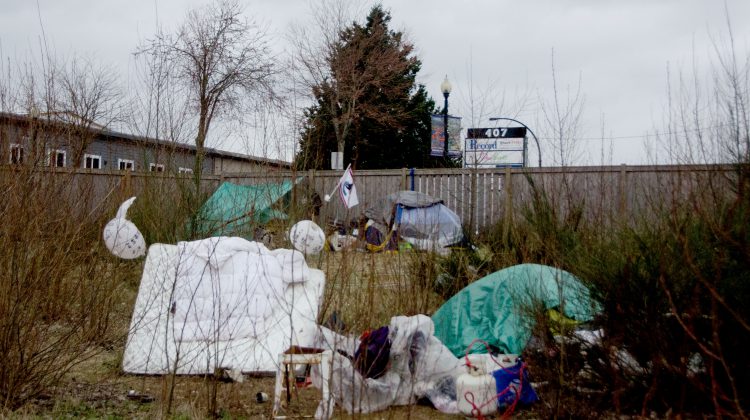 COURTENAY, B.C- A resident of the encampment in downtown Courtenay doesn’t see a problem with where he’s living.

44 year old Ron Provencher has been living on the empty lot at the corner of England Avenue and 5th Street, which used to be the site of the Palace Theatre. According to Provencher, he’s had a tent pitched on the lot for the past two months.

The site has a wooden fence around the perimeter of the lot blocking it from view. Behind the fence, however, the green space on the inside gained residents, including Provencher.

Multiple tents are now present on the site, along with a scattered amount of litter, such as bicycle parts and propane tanks.

A door at the northeast corner of the lot was hanging open on Wednesday afternoon. 98.9 The Goat spoke with Provencher on Friday afternoon. He said that many of the rental properties geared towards low-income residents of the Valley won’t rent to the people who live on the lot.

“They just assume we’re not going to pay the rent, or (that) we’re just drug addicts, drinkers, whatever it might be,” said Provencher.

“They won’t rent to us, so we’re forced to live in tents all over the city. The City comes and kicks us out, tells us to move, so we move to the next spot, and then we come a week later and kick us out of there, and then we move again and they kick us out again. Everywhere we go, they tell us we got to go, we can’t be there, go go go, everywhere.”

Provencher indicated that he and the other residents of the lot had been told they didn’t have to leave until the owner of the site tells them to leave. He also stated that police officers had come by the site roughly two weeks ago, after some rowdy people were forced to leave the vacant lot by the people camped out there.

He said the space had been “cool” since, and didn’t think the homeless presence was causing an issue.

“I don’t see why it’s a problem,” said Provencher.

“We’re behind a fence, they can’t see us, unless they look through the cracks. I don’t see a problem at all, we’re fenced in, we’re hidden. Sure, it’s prime real estate, but we’re behind fences. We’re not hurting anyone.”

When asked what kind of solution he wanted to see, Provencher said that he wanted housing where he and the other lot residents could move into.

“We’re not hurting anybody, we just want somewhere to stay and sleep at night, that’s all,” said Provencher.

“We know that we can come here, I’ve been here for two months myself, almost three, it’s just our home, that’s all. It’s just where we go to sleep at night.”

The City of Courtenay has not made any moves to clear the site as of this publication. As the situation develops, we will report on it.