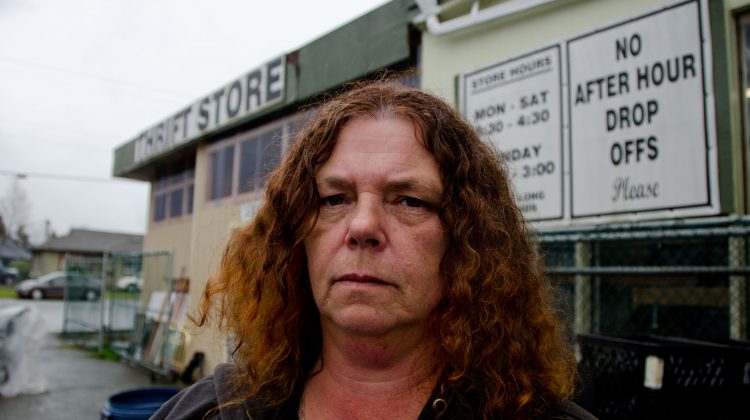 Penny Marlow, the owner and operator of the Community Thrift Store, is pictured outside her business on April 11, 2018. Photo by James Wood/98.9 The Goat/Vista Radio

COURTENAY, B.C- A local business owner has stopped counting the break-ins at her store.

According to Penny Marlow, the owner and operator of the Community Thrift Store in Courtenay’s west end, there have been close to a dozen incidents at the business in 2018. Property from the store has been taken, and damage to windows, doors, and security cameras has been expensive to fix.

“We have a locked outside compound, but they just keep coming in,” said Marlow.

“They use bolt cutters, they climb the fences. The last one, they cut the bolts off of our locks, off of our Seacans, which is our storage area.”

Marlow said the store had put up a “pony wall” on their property, though they aren’t able to fully enclose the business.

“I actually stopped calling the police, because it was kind of embarrassing to be calling them just about every other day,” said Marlow.

The store recently posted security footage from a break-in earlier this week, using their replacement camera after the first was stolen.

While Marlow was supportive of the local police arresting those responsible for the break-ins, she believed they were not being held accountable for their actions.

“When it gets to the courts, nothing happens to these people, so they just keep breaking in and helping themselves, and destroying property,” said Marlow.

“I think the system needs to change.”

98.9 The Goat has reached out to the Comox Valley RCMP for comment on the most recent theft.