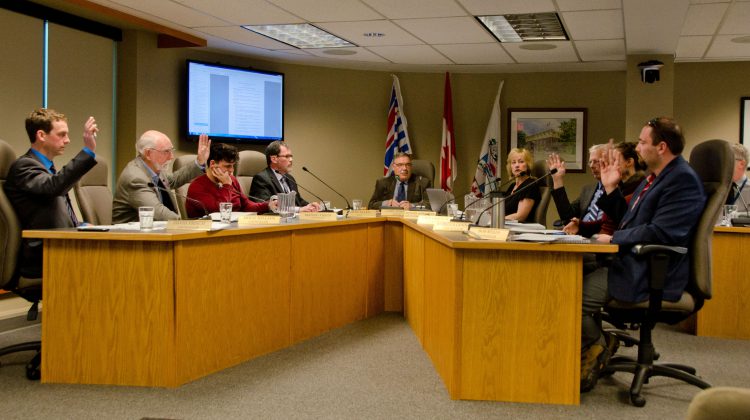 Council members in favour of the 2018 municipal budget in Courtenay raise their hands to pass the final version of the budget on April 16, 2018. Photo by James Wood/98.9 The Goat/Vista Radio

COURTENAY, B.C- The last stage of the municipal budget in Courtenay has finished.

During the meeting of April 16, council was asked to pass the final version of the city’s 2018 budget in the form of a consolidated financial bylaw. With the bylaw approved, council would have finished up the entire budget approval process for the year.

In the draft General Fund budget presented on April 3, council was being asked to approve a rise of 2.5 per cent in property taxes for the 2018 budget.

The 2.5 per cent rise was dropped on April 3 to 1.5, following a motion from Councillor Doug Hillian.

During Monday’s discussion on the final approval, Councillor Manno Theos raised concerns about the planned tax rises contained within the budget, a point both he and Mayor Larry Jangula have been bringing up throughout the entirety of the budget process.

Both Theos and Jangula had been steadfastly voting against the proposed financial plans for 2018, basing their opposition on concerns that taxpayers in Courtenay can’t afford the rises.

Theos once again raised that opposition, with additional worries about the projected city budgets for the next five years showing what he found to be significant increases. He didn’t believe it was sustainable for the city’s tax base, and mentioned planned hiring of municipal staff as a factor in increased costs.

The question of hiring didn’t find much traction among the other members of council beyond Jangula, with Councillor Bob Wells arguing that the hires were based on a business case presented to the city.

Councillor Erik Erickson also mentioned that the council was voting on this year’s budget, with projected budgets to be decided by future councils.

The final approval of the budget eventually passed, with Theos and Jangula opposed.

During the discussion, Councillor David Frisch spoke in support of the planned budget, while mentioning that residents need to know they were getting value for their money. Reached after the meeting, he said that taxes needed to be raised in the city to avoid service cuts.

“When making that decision I decided it would be better to just pay a little bit more for the services we have. If we don’t raise the cost of taxes in proportion with the rise in costs that we’re seeing on stuff like hydro, fuel, and supplies, than we would be forced to cut something.”

Frisch also said that he was concerned about his tax bill, but he believed that the rises would allow the city to plan better, citing efforts at downtown revitalization, the development of a master plan for transportation, and neighbourhood planning.

He believed that the plans would cost “more money as they go forward”, but they would still have value for residents.

He believed his own tax bill of $2800 will go up by $170 this year. He also predicted two per cent property tax rises each year in Courtenay, without better planning.

As for Jangula, he wasn’t happy with the budget’s approval.

“The fact that it’s passed, it gives everybody some clarity.”

He doubted that homeowners and businesses in the area will take the increase positively.

“If you look at the bottom line of people paying the taxes, most people’s homeowners taxes have gone up 40 per cent in the last five years,” said Jangula.

“Most businesses, 150 per cent. If you want to double that again, I’m not sure how many of those small businesses and homeowners will keep paying.”

Jangula believed that the budget will likely be an issue in the upcoming municipal election.