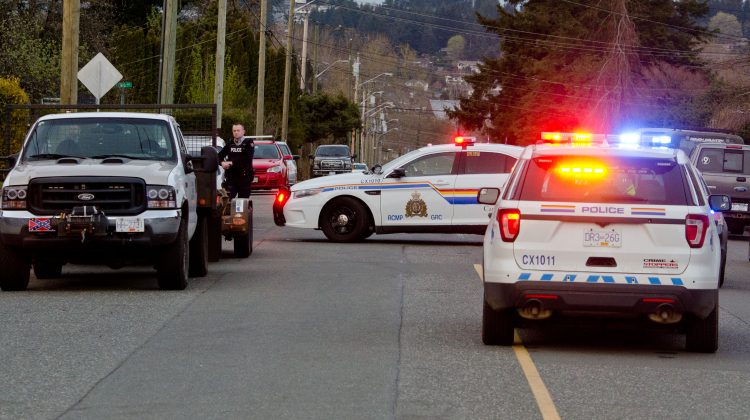 Police on-scene along 11th Street in Courtenay on the evening of April 17, 2018, after a man passed away in the area. Photo by James Wood/98.9 The Goat/Vista Radio

UPDATE: The death is non-criminal in nature. The Coroner’s Service has said the man was in his 40’s, and did not identify the man due to privacy legislation.

COURTENAY, B.C- A coroner’s investigation is underway in Courtenay, after a man died on Tuesday evening.

While many of the official details are unavailable at this time, a heavy police presence was observed at the intersection of McPhee Avenue and 11th Street around 7:30 p.m.

At least three police cruisers from the Comox Valley RCMP were on-scene, close to a business along the north side of 11th Street.

Officers, as well as a member of the BC Coroners Service, were seen talking to residents of the area who later drove off as the scene was cleared around 8:00 p.m.

Before leaving, the coroner confirmed there had been a death in the area. An apparent friend of the deceased later told 98.9 The Goat that a man had passed away.

Both the RCMP and the coroner were unable to provide further details at the scene. More information will be added to this report as it becomes available.