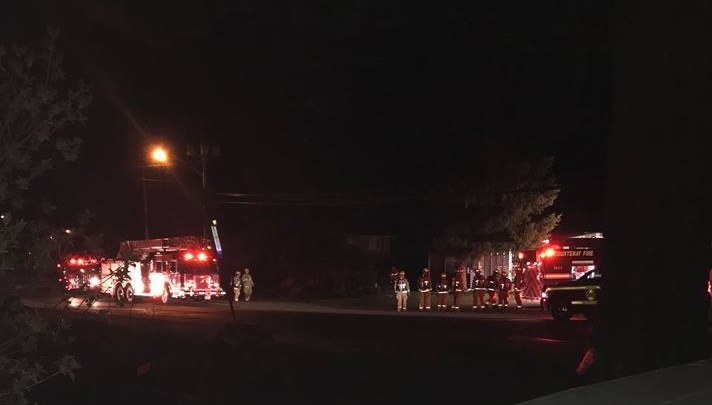 A photo of the scene, courtesy of Penny Marlow.

COURTENAY, B.C- An early-morning fire has caused severe damage to a home in the Comox Valley.

According to Courtenay deputy fire chief Kurt MacDonald, firefighters responded to a call from the trailer park in the 1700 block of Cumberland Road around 1:00 a.m. on Wednesday.

They were met by the home’s two residents upon arrival, and managed to knock down the fire quickly, containing it to the washroom of the home. MacDonald said the blaze appeared to have been sparked by an unattended candle, which caught fabric on fire. The flames had spread to cabinets in the bathroom.

“Candles are popular, and are used quite a bit in the home,” said MacDonald.

“Be diligent, make sure that you put them out when you’re done using them, and make sure you’re using them in a safe location.”

The washroom suffered “significant damage” according to MacDonald, but further damage was prevented by the female occupant closing doors on the way out of the residence.

A total of two engines, one ladder truck, three support vehicles, and 21 firefighters responded to the scene. No injuries were reported, and the two occupants of the home were found to be in good health by BC Ambulance.

The fire was the third major call for Courtenay’s fire department this week, which handled a bush fire on Monday behind Superstore and another early-morning structure fire near the Courtenay Airpark on Tuesday.

MacDonald said the Tuesday fire has been deemed to be human-caused, though an exact source of the flames has not yet been determined.