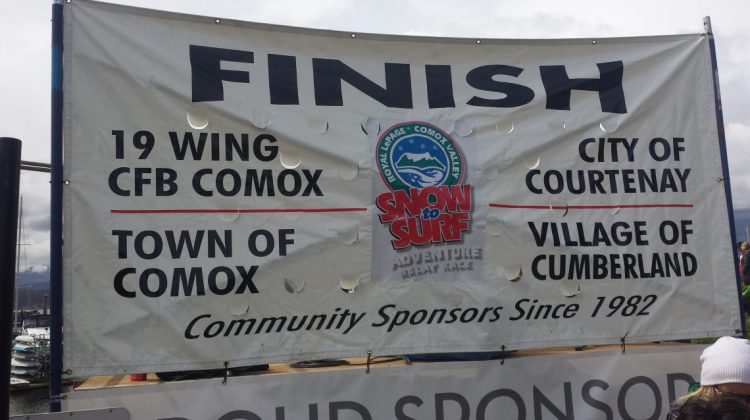 The finish sign from the 2017 event. Photo by Justin Goulet/Vista Radio.

COURTENAY, B.C. – The 36th annual Royal LePage Comox Valley Snow to Surf Adventure Relay Race is this Sunday, and more than one hundred teams have signed up for the event.

When speaking with Vista Radio earlier this month, Gibson had said that the goal was to hit close to 175 teams, but he told Vista Radio on Wednesday that having a smaller field has its advantages.

“The nice thing is that a smaller field is easier to manage,” he said.

The event is a relay race that starts at the top of Mount Washington and wraps up at the Comox Marina. Some of the race legs include alpine skiing, biking, running and canoeing.

Gibson said those who are not on a team, but want to help out as a volunteer can contact organizers through the Snow to Surf website.

“We will take volunteers up until the morning of the event, we can always put people to work doing something,” he said.

“In most cases, the volunteer opportunities are road marshals, helping in transition areas.”

He noted that even if residents don’t want to participate in the race or volunteer, it’s a fantastic event to watch from the sidelines.

“The best place to watch the race is at Marina Park in Comox. Cumberland Brewing Company is doing the beer garden for us this year with help from the Mount Washington ski club, we’ll also have food vendors down there,” he said.

“Hopefully the weather is going to be cooperative and it will just be a cool time to cheer on the paddlers when they cross the finish line.”