No injuries after six-car collision on Lerwick Road 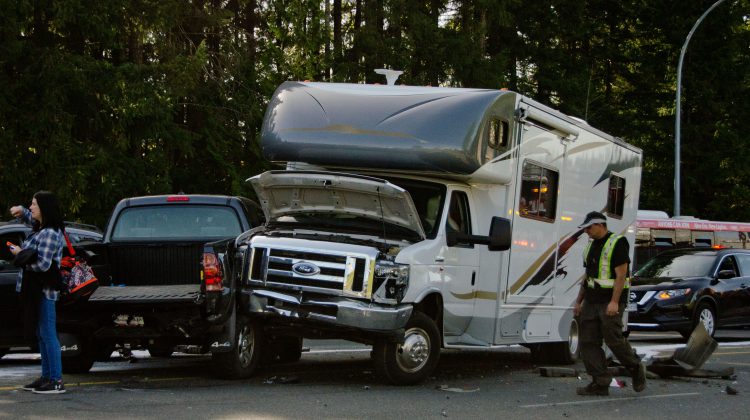 A crashed motorhome rests between two vehicles close to the intersection of Lerwick Road and Ryan Road in Courtenay during the afternoon of April 26, 2018. A clear reason fro why the driver of the home hit the other vehicles remains unknown at this time. Photo by James Wood/98.9 The Goat/Vista Radio.

COURTENAY, B.C- A major road in the Comox Valley was closed this afternoon, after a crash involving six vehicles.

The crash took place shortly after 4:00 p.m. in the left turning lane of southbound Lerwick Road, close to the intersection of Lerwick with Ryan Road. The driver of a motor home careened into the turning lane while heading south towards Comox, striking around six vehicles.

A total of eight people were viewed by BC Ambulance at the scene, but all refused treatment. No injuries were suffered by anyone involved in the crash.

The Courtenay Fire Department and the Comox Valley RCMP both responded to the call, with officers controlling traffic and firefighters assisting with clean up.

“(It was) very fortunate there was no injuries, for sure,” said Courtenay deputy fire chief Kurt MacDonald.

“It doesn’t happen often. Anytime you don’t have any injuries it’s a good thing for sure.”

The northbound lanes of Lerwick towards the hospital were closed during the cleanup of the crash. The reason why the motorhome collided with the waiting cars remains unknown at this time.