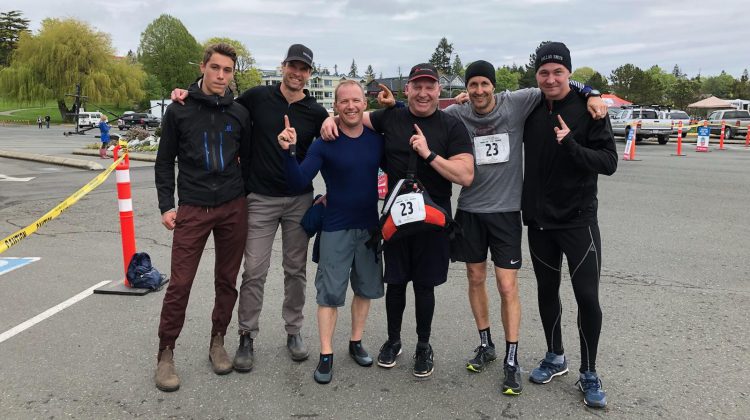 Brett was a part of the winning Biblio Taco team. He served as the team’s lead canoeist, and the team competed in the open men’s category.

“We took the long course (canoe) and went right around. When you have a lead, you don’t want to take a chance with a shortcut and get hung up,” Brett said.

Biblio Taco held the lead for the majority of the race.

Greg MacDonald put the team together at Biblio Taco, but was unable to compete in the race.

Brett had previously won the race with the Island Honda Bonzai team, and said a few of the Bonzai members joined for this year’s event, teaming up with Greg MacDonald from the Cumberland taco shop to form a new squad.

“A big thank you to Greg MacDonald and Biblio’s Cumberland Tacos,” Brett said.

The rest of the top ten came out as follows:

“One didn’t show, but that’s up from last year and up the year before,” said race chairman Rick Gibson.

“Before we had the two no-snow years at the mountain, we were close to 200 teams and we had two lousy years, which kind of sucked a lot of participation out of the event, but it’s been growing. The youth category is growing, and it’s nice to see younger people in the event. Not just kids, but younger adults.”

“You look at the smiles and you look at everybody around, it’s a pretty good day.”

Gibson said initial, unofficial results are expected to be posted tonight on the event’s website.