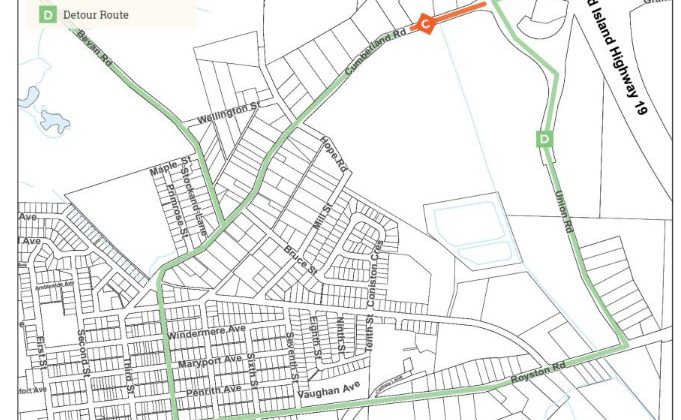 A map of the area highlighting the construction zone.

CUMBERLAND, B.C- Travellers in the south end of the Comox Valley will be getting detoured tomorrow.

According to a notice from the Village of Cumberland, there has been quick progress on the ongoing roadwork along Cumberland Road, at the village’s north entrance.

Groundwork on the current worksite, near the intersection of Union Road and Cumberland Road, has gotten pipes in the ground. However, paving work needs to be finished off on the route, which requires a full closure tomorrow morning.

“No through traffic will be allowed that day,” read a release from the village.

“All access to businesses/homes on the west side of the construction area will be via the detour route.”

The detour route runs from Union Road to Royston Road, as well as Dunsmuir Avenue.

For all other dates, traffic will have access to single alternating lanes, with both lanes open in the evening.

“While completion of paving is a significant step, there will be continued work in the area (line painting, landscaping),” read the release.

“Single lane alternating traffic can be expected until the end of May.”