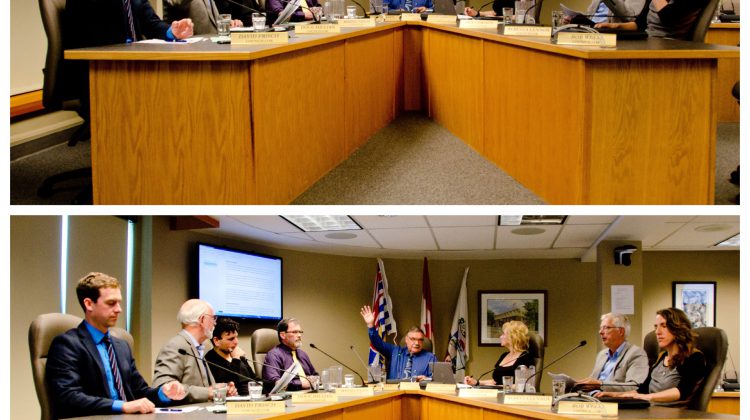 Courtenay city council votes on a proposed change to property tax rates on April 30, 2018. Mayor Larry Jangula, centre, was the lone vote against the proposed change. Photos by James Wood/98.9 The Goat/Vista Radio

COURTENAY, B.C- Taxes in Courtenay will be going up a bit more than expected this year.

During their latest meeting on Monday evening, city council was presented with a request from municipal staff to adjust residential and commercial property tax rates, in order to balance out the tax burden equally among both groups.

The original increase in rate approved by council for the portion of the municipal budget filled by property taxes in 2018 was set at 1.5 per cent, after several meetings and debate over the budget.

The change approved by council last night will see that rate go from 1.5 per cent to 2.83 per cent, for both residential and commercial properties, after staff informed council that the commercial sector would be more affected by the planned rate when compared to the residential properties.

“The property tax increase for an average Class 1 residential property, valued at $374,000, is estimated to increase by 2.83% or $35.27 for the municipal portion of the tax notice,” read part of the council agenda.

With the change, the forecasted tax bill for average residences, with all municipal fees combined, is expected to be $138.36, with other authourities expected to ask for around $98.

The decision to change the rates passed the council chamber with three readings, with Courtenay mayor Larry Jangula being the only dissenting vote.

“It’s always difficult, to move taxes to benefit the small businesses, or businesses at all, because you’re always criticized as saying you’re unloading business costs on the homeowners,” said Jangula, after the vote.

“But, the small businesses in particular, and all the businesses, are a huge part of what makes your community thrive. They’re employers, they’re people that support community events, that support sports teams, etcetera, and I think it’s very, very important that we look after them as well as we can.”

Jangula expected the change to be finalized by next week.

EDITOR’S NOTE: The previously-reported rise of 1.5 per cent is the rate by which the tax revenue portion of the city’s budget is planned to rise in 2018, not the planned tax increase. The voted-on rate of 2.83 per cent will be affecting both residential and commercial properties in the community, outlined in municipal agenda documents.