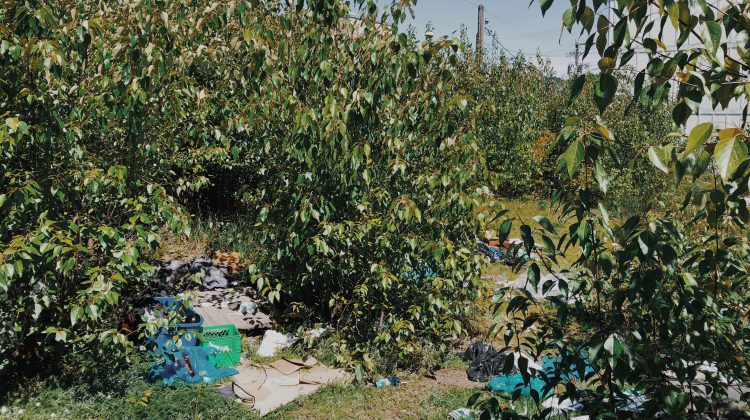 The remains of a homeless camp are seen behind a fence in downtown Courtenay on May 7th, 2018. Photo by James Wood/98.9 The Goat/Vista Radio

COURTENAY, B.C- While the campers might be gone, a vacant site in downtown Courtenay is still causing headaches at City Hall.

Earlier in the spring, a homeless camp sprang up at the former site of the Palace Theatre, near the intersection of England Avenue and 5th Street in downtown Courtenay. The site has a wooden fence around it’s perimeter, blocking the vacant land from view.

The fence also hid a growing population of homeless Valley residents, with a small number of tents and makeshift shelters erected in the corners of the lot.

However, the site is now empty, according to Courtenay mayor Larry Jangula. Speaking last week, Jangula said that the city has “re-secured” the fence, with officers from the local RCMP detachment involved in clearing out the site.

As of Monday afternoon, the gate leading into the lot has been shut, with a new padlock and a sheet of wood in place across it’s bottom half. A newly-secured fence gate leading to a former homeless camp in downtown Courtenay is pictured on on May 7th, 2018. Photo by James Wood/98.9 The Goat/Vista Radio

“People being people, it’s hard to predict what people are going to do,” said Jangula.

Litter from the former residents still remains at the site, and the question of which authourity is responsible for the site still remains a point of contention between the municipality and First Nations Enterprises Inc., the owner of the property.

According to a letter sent by the company to the City of Courtenay, the organization is based in Hong Kong, with an office on the 16th floor of the Tak Shing House, an office building in the city.

In the letter, which was sent on April 16, the company states that “the City’s failure to properly maintain the fence and entrance gate has become a serious security issue” which resulted in the camp.

Citing an agreement with the city, the owners asked for the gate to be secured with a “proper level of hardware and supervised security”, the arrangement of the campers to be evicted, the continued securing of the site, a clean up of the site to it’s “unadulterated state”, and the absorption of all costs from the described steps.

They also directed city authourities to contact James Fisher, named as their representative in the Valley, if they had any questions.

Jangula indicated that he did not appreciate the communication from the company.

“The city has quite frankly done a lot to work with this owner, and it’s also very deceptive, because the sign on the lot says First Nation’s Enterprises, and the assumption would mean that it’s Canadian First Nations. Well, it’s not.”

He said that direct contact with the lot owners always goes through lawyers, and also mentioned a previous plan with the lot.

“As I mentioned in the past, when the lot was getting overgrown with weeds, the city had offered to go in, clean it up, put some gravel, and pack it down and put benches there, which would allow people to use it as a gathering place, and even to assume liability for that,” said Jangula.

“The owner was against that.”

As for what local authourities could do with the site, Jangula said the city wasn’t able to expropriate the land.

He did say that downtown businesses had approached him about purchasing the land, though he was not sure of the exact price, and raised the idea of higher taxes for property owners who allow their holdings to degrade.

“It’s not helping the downtown, and the city has done as much as we could, and I’m quite proud of what we’ve done,” said Jangula.

“But you can tell by the tone of this letter that nothing is good enough.”

The MyComoxValleyNow.com newsroom has reached out to Mr. Fisher for comment on the company’s plans for the site.

We have not yet heard back.